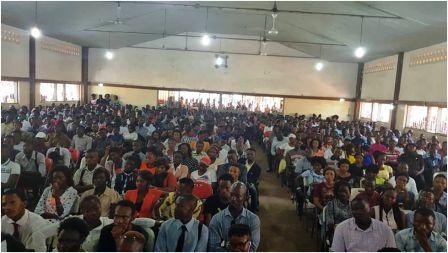 The principal of the Milton Margai College of Education and Technology Polytechnic, Dr. Philip Kanu on Thursday 6th December 2018 announced representatives of the Interim Executive of the college’s Students’ Union as Rosaline Kamara, final year Bachelor of Education in Business Studies as Leader of the team, Atila Taylor, final Year Educational Administration, secretary to the team, Abdulai Mansaray, Higher Teachers’ Certificate Final, Business Studies, Abdulai Habib, Civil and Building Engineering and Jene Baion clarifying that the Interim Executive would hold the fort until elections are held next year.  (Photo: Cross-section of students at the ceremony)

The Principal made the statement at the annual General Assembly of students, lecturers and administrative staff at the Great Hall of the college’s Goderich campus during which he articulated that plans are underway to make the college great again, provide water tanks, open the cafeteria, provide transport for staff and students and rehabilitate the three campuses.

He revealed that shortly before the ceremony he held discussions with the new Interim Executive appealing to them not to betray the confidence reposed in them by his administration, recalled that he was the first student from the college to be elected President of the National Union of Sierra Leone Students (NUSS), that he was always a leader during his student days reiterating that members of the Interim Executive are servants and not bosses, assured students and staff of protection, that sexual harassment and victimization would not be entertained assuring that plans are underway to rehabilitate the college as well as improve the learning environment for students.

“The BADEA project will rehabilitate the three campuses of the polytechnic including the workshops and laboratories but I want to appeal to students to take good care of the facilities when completed. Furthermore, students are encouraged to report and apprise lecturers who do not teach. The identity of such students will be protected,” he affirmed.

Dr. Kanu recalled that the last Students’ Union elections ended in chaos, the reason for the intervention underlining that in the past Students’ Union elections were peaceful with no police presence and urged students to accept the Interim Executive quoting Psalm 75 verses 6 and 7 which states that power comes from God intimating that it was God who appointed him principal through the president reiterating that students should argue but not fight during their elections scheduled for next year adding that the newly-inaugurated Interim Executive of the Union would hold the fort until the elections are conducted recalling that during his student days at the college, Students’ Union elections were peaceful with no police presence but underscored that students now force the administration to invite the police during their elections.

Dr. Philip Kanu further entreated the students to accept the Interim Executive representatives drawn from the three campuses of the polytechnic adding that the new Interim Executive must consider themselves servants and not masters as well as copy the example of good leaders.

The principal went on to appeal to the Interim Executive to bring all the different factions in the college together to speak with one voice stressing that they must not hate their opponents nor fight underlining that the Interim Executive was carefully chosen, is disciplined and sound, the reason for their appointments, continued that the administration would monitor their performance and further intimated students that they do not need to like him or his administration assuring that he would be fair, transparent and administer justice equitably to all students disclosing that he has received reports of misconduct by some prominent staff who would be investigated and warned students not to act as middlemen/women for lecturers who want to date female students maintaining that the administration does not have the right to elect Students’ Union representatives.

According to the principal, his administration would support the Interim Executive for the college to regain its past glory, restore sanity in the hostels, advocate for students’ welfare, asserting that the executive would do wonderful things as its members are God-fearing with exemplary character and academic performance, that his administration would not micro-manage the Interim Executive, explained that the college’s song has a deep meaning for students to ever remain friends of the college and revealed plans by the old students to organize fund-raising activities as they have taken the college as theirs affirming that friends and enemies made at the college would last for life.

The police commander at the college’s Police Post disclosed that armed guards would be deployed on campus at night assuring that although the law is stiff she would be flexible as she is au fait with student issues disclosing that her doors are always open for discussions but warned that she would be professional in discharging her duties.

Rosaline Kamara, the Leader of the Interim Executive said she is delighted to serve, allayed the fear of students that she would protect and promote their welfare especially in their academic pursuit but reminded them to put premium on their academic work.

The vote of thanks was rendered by Jene Baion from the Brookfields Campus who urged all to heed to the advices of the various speakers by putting them into to practice and wished them all the best.