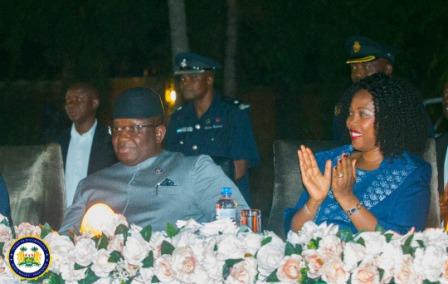 Radisson Blu Freetown, Wednesday 5 December 2018 – His Excellency President Julius Maada Bio has told journalists in Freetown that his New Direction Government is at an advanced stage in the repeal of Part V of the 1965 Public Order Act that criminalises libel.  (Photo: HE Julius Maada Bio and First Lady Fatima Bio at the inaugural media cocktail)

He was addressing the inaugural Media Cocktail at Radisson Blu, organised by the Office of the Press Secretary and Presidential Spokesman. The occasion brought together over 120 foreign and local journalists, editors and media owners.

“You could all recall that in Paragraph 147 of my maiden address at the State Opening of the First Session of the Fifth Parliament, I pledged my Government’s commitment to among other things ‘repeal the seditious libel law’ and ‘enhance the capacity of the IMC to enforce the IMC Act’,” he said. The President added that that was in fulfilment of his manifesto commitment, noting that everyone was aware that: “Part V of the Public Order Act criminalises any publication that is deemed defamatory or seditious and has been used as a regime to unduly target and imprison media practitioners and silence dissident views.”

“Therefore, I am pleased to inform you that a Cabinet paper with full concurrence from the Attorney General is now before Cabinet for consideration. It is my honest and genuine view that Part Five of the Public Act of 1965 should be repealed and will be repealed in the shortest possible time,” he said. He, however, cautioned that: “The repeal of Part V of the Public Order Act does not envisage a void in the accountability matrix relating to freedom of the press and expression, nor would it imply softening the legal regime or grant a carte blanche to journalists to defame people”.

President Bio noted that even where the justification for its retention may abound, criminalising libel was no longer fanciful, adding that the good news was that the government would soon bring an end to the breach of about half a dozen international conventions to which Sierra Leone was a signatory.

“When we repeal the Public Order Act of 1965, we hope to open up Sierra Leone’s media sector to new investment and growth, foster creativity and innovation, and support the development of high-quality journalism which will, in turn, support good governance and democratic accountability,” he said.

He also promised that his government would give the media regulatory body, Independent Media Commission, the leverage required to work independently, announced that the government subvention due the Sierra Leone Association of Journalists had been budgeted for and was available to access as and when they were ready without any preconditions.