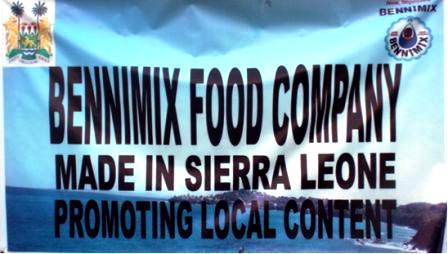 According to the Company’s Nutritionist Expert, Regina Thoronka said they decided to grace the Football Match Between SLBC versus AYV because they want to show case the value of the Local Content Act which they are still appealing to government for more consideration (LCP) to Journalists noting that the Bennimix Food Company is owned by a Sierra Leone based businessman with 100% employment for locals across the country.

The Nutritionists specialist noted that Bennimix Food Company was established way back since 1975 with a well balanced food for babies from 6-24 months. She explained that you just need to add some amount of boiling water to the food and mix properly.

Madam Thoronka added that Bennimix Food is made of natural food stuff from Bennie for babies, with no additives and no preservatives adding that it would make babies to grow smart and strong with 100% safe for all age. She encouraged suckling mothers to always go for Bennimix food in their various  branches or at the production centre in Bo City because according to her it provide all the nutrients which the baby need to grow well with focus mindset. She emphasized the exemplary role which media institutions  have been playing since the establishment of the company to date and appealed to Journalists to come onboard in promoting the local content act especially for food and nutrition for under-five because according to her, she said Bennimix Food is made from locally produce stuff with the correct formula which is well recognized by the Ministry of Health and Sanitation (MOHS) , and other local agencies. Speaking also to this medium, the Sales and Distribution Officer, Madam Mariama  Jalloh says the aim of company is to inform and educates the general public on the important of sustaining the Local Content Policy for Sierra Leoneans to benefit from their natural endowments and that the company is dominated by Sierra Leoneans from top to bottom.

Madam Jalloh expressed happiness to media institutions for organizing such forum for the dissemination of vital information and called all lactating Mothers to always feed their babies with Bennimix Food to promote locally made produce.

On his own side, the senior marketer, Mr.Amara Kamara said Bennimix Food Company has a well package Bennimix Food of 50g packet as samples to be distributed among Journalists in a bid to promote local content and it is good for the safety of babies and even the aged. He said sport men and women should also take advantage of the product because it has all the require nutrients which the body need to grow well.

He appealed to media institutions to continued giving supportive coverage to the process and called on government to continue strengthen the local content policy with the attention it deserves and warn other stakeholders not to despise the company.

Kamanda Ras Makunja The Leader of...