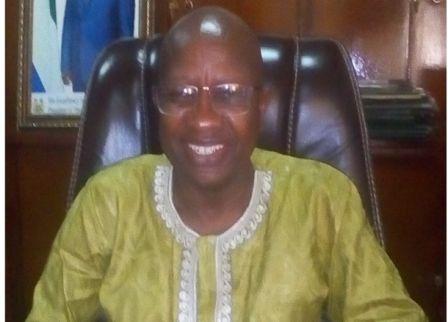 Thousands of beneficiaries in the rural areas and the entire staff of Sierra Leone Water Company (SALWACO) have extolled the newly appointed Director General, Ing. Philip K. Lansana for what they have described as “his robust approach towards providing a charismatic, shrewd and quality leadership for the company”.  (Photo: New SALWACO Boss, Ing Philip K.Lansana)

It could be recalled that since his appointment to that all-important position at SALWACO, Ing. Philip K. Lansana has successfully rebranded the capacity of the company staff. SALWACO was established by an Act of Parliament to ensure sustainable healthy water system in the rural areas of Sierra Leone, especially in the provincial cities and towns of Bo, Kenema, Makeni, Koidu, Kabala and Lungi respectively.

In an exclusive Interview with the erudite Director General, Ing. Philip K. Lansana, he disclosed that he has overhauled the entire administrative and operational structures of SALWACO with regards to performance. As an international expert in water management, the new DG assured Sierra Leoneans that his acumen, knowledge and experience in water management would guarantee the availability of quality water to people in the rural communities.

Ing. Philip K. Lansana disclosed that he is not a stranger at SALWACO but a renowned personality who had previously worked in the company before he successfully gained an international employment.

According to the DG, the poor management of water in the rural communities would soon come to past with the revamping of the water sector in those communities. Ing. Lansana disclosed that when the water sector is revamped, it would be commercialized at an affordable cost, adding that there are already expert on the ground to conduct training for the Commercial and Human Resource Units of SALWACO. The DG furthered that the training is geared towards raising the professional standards of the company staff. Ing. Lansana assured that the cost for water in rural communities would be affordable and the people have already expressed their willingness and readiness to pay for water service which, he assured, would be cheaper than what they now pay for drinking water.

Through his visionary leadership and professional guidance, the engineer of international repute said he would make the painful experience of people in rural communities fetching water in unsafe and unhygienic conditions would come to past. The new MD recalled that over the years, water supply and distribution in rural communities were not only a problem but fraught. But with the new management, he said, the company would work assiduously to ensure that such malaise is addressed as quickly as possible.

In all fairness to the new DG of SALWACO, Ing. Lansana has been credited with a visionary intervention that had never been at play at SALWACO from its inception. As a result of his initiative, modalities have been designed to ensure that water becomes an affordable and accessible commodity for all people in the rural areas. It is against this backdrop that the erudite MD is working in consonance with a SALWACO Bill that stipulates an extension of its responsibilities to all the provinces. The handy and highly needed piece of legislation would make water resources available and affordable to the rural communities.

Ing. Lansana also promised to work aggressively to extend the company’s its network to more communities in the rural districts so that people would be proud and boastful of drinking safe and hygienic water, adding that he is up to the task of bringing innovation and revolutionary reforms to the water sector which, he said, had been written off by International brokers.

In another development, one of the expatriates of National Water and Sewerage Corporation, Madam Joyce Bachereh, a Ugandan, intimated this medium that their team comprised four experts from Uganda, including Technical, Human Resource and Commercial Experts flown into the country to conduct intensive training for the staff of SALWACO to improve on the commercial unit for efficient and technical service for the institution.

Madam Joyce Bachereh said the training would help boost the human resource capacity and commercial strategy for efficient service delivery that will transcend the revenue generation base of the company, adding that they are in Sierra Leone for ninety days.