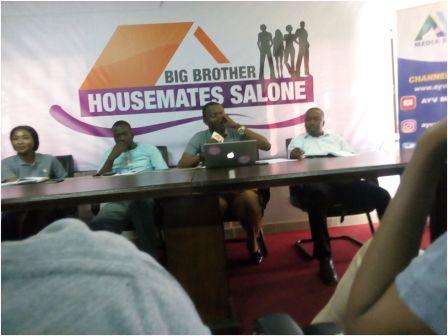 It all started when the Operations Manager of AYV, Madam Stella Bangura updated audience of the robust zest of AYV towards changing the narratives by creating the much needed platform for young people that have the capacities to change Sierra Leone. In her presentation, she emphatically emphasized on their passion as Media Empire to give opportunities to the deprived class. She revealed that adding values to celebrities and promoting the Local Content Policy is key to their operations. Stella drew the attention of all, to Ella Koblo Gulama’s Fund Raising event with family members to be involved, after given synopsis of recent achievements made by the Africa Young Voices (AYV).  (Photo: MD Lakoh, Unveiling The Big Brother Show With His Team)

The Representative of Africell, Abdul Aziz Kamara affirmed that Africell has given the opportunity to every Sierra Leonean to communicate. In a rather exciting mood, Kamara stressed on how the mentioned Telecommunication Company has been engaged in changing the lives of people by helping them actualize their dreams. He asserted that the talent pool for Sierra Leone is so great and assured Africell subscribers to stay fixed, by encouraging the gathering to design and take events to Africell for sponsorship.

That sensational occasion reached its climax when the Managing Director of AYV, Dr. Ezekiel Duramani Lakoh commenced his presentation with the Minister of Youth Affairs, being meticulous about the activities of AYV. In no time, Dr. Lakoh avowed that and I quote “We promised and we have delivered. We are doing too much but we have not even started. AYV is currently competing with big international TV stations across the sub region. We are craving the indulgence of Sierra Leoneans to continue to support AYV. To augment the diligent patriotic services of our teachers, AYV will for the first time send Six (6) teachers to represent Sierra Leone in an international Teachers price programme. AYV is supporting the ECOFEST”. Dr. Duramani officially unveiled the Big Brother Housemates Salone by recognizing African Media Empire in collaboration with Africell and AYV. He confirmed the fact that this event is meant to promote young people in the entertainment and social industry in Sierra Leone, with an addendum that mixed participation would be incorporated this time. Moreover, Lakoh updated the Press that AYV is not only focusing on money making but primarily striving to develop young people across the country. In an exciting tone, he said they are ready to spend Five Hundred Thousand US Dollars ($ 500,000.00) for Six (6) weeks of live broadcasts, with the latest infrastructure for outside broadcasting and encompasses all expenditure to be incurred.

In other to better explain the show, the flabbergasted MD proudly revealed that the Star Price is One Hundred Million Leones (Le 100,000,000.00) and the cheque is ready. After encouraging Sierra Leoneans living in the Diaspora to apply, Lakoh elucidated the audience that application forms will be available from the 12th to the 30th November, 2018 through Africell Money; everyday’s price of One Hundred Thousand Leones (Le 100,000.00) excluding the Winner and weekends; the long awaiting event would commence February 14, 2019 and the price of the application form is One Hundred and Fifty Thousand Leones (Le 150,000.00).

The Minister of Youth Affairs(MOYA), Mohamed Orman Bangura, when called upon registered that our generation is on the right side of History and that nothing is impossible under the new direction, though he did not show any financial commitment on the side of government. For further clarification, the Operations Manager added that codes will be given immediately payments are made by participants; Regional Audition places will be Bo, Makeni, Kono, Kenema and Freetown; Ten(10) ladies and Ten(10) gentlemen will be allowed to enter that prestigious palace; Channel 34 would be on right round the clock; assuring every Sierra Leonean to access channel 34 everywhere ; any generally acceptable ID would be allowed ; people within the age bracket 21 years and above will participate based on set criteria; the major criterion to win is by voting and the THEME for that event was kept in SUSPENSE.