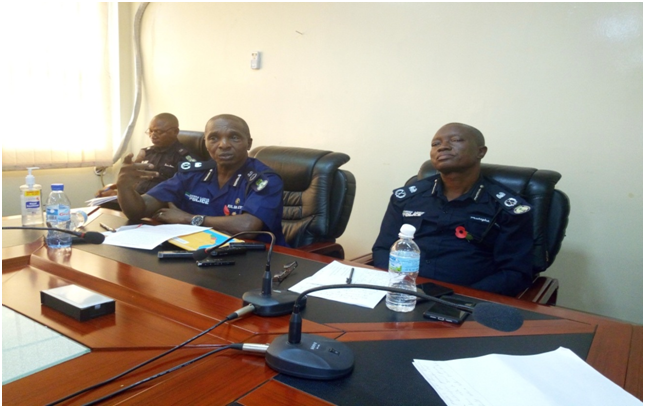 The Sierra Leone Police Force (SLP) on Thursday 1st November 2018 informed news men that they have slammed a ban on all forms of street processions and carnivals throughout the republic of Sierra Leone. This was disclosed to journalists at a press conference held at the Police National Headquarters in Freetown.

A press statement was issued and signed by the Inspector General of Police (IGP), Dr. Richard Moigbe and read out to the press by the Public Relations Officer and Head of Media, Assistant Superintendent of Police (ASP), Brima Kamara. The release states that “It is unlawful for any person or group of persons to engage in any street procession or street carnival without the written permission of the Inspector General of Police (Section 14 of the Public Order Act of 1965).”

Director of Community Relations in the Sierra Leone Police, Assistant Inspector General of Police, AIG Edward Kalia Sesay, said all street carnivals are banned and the ban is not only for Freetown but across the country. He continued that the leadership of the SLP will not grant any permission for street carnival for the 2018 festivity. He added that street carnival creates a lot of insecurity and stressed that no permit will be granted to any applicant for a street carnival. He said the decision to ban all street carnivals will be communicated throughout the country and strict adherence will be enforced to ensure compliance.

The press release also stated that Saloon Bars should closed at 11PM as their official closing hour as stipulated in Section 27 of Cap 238 of the Liquor Licensing Ordinance and police will be obliged to enforce the closing hour where there is reasonable ground to believe the bar’s operation is annoyance to others within the community.

The release continued that it is unlawful to drive whilst drunk or under the influence of alcohol according to Section 102 of the Road Traffic Act of 2007.  It is unlawful for any person or group of persons to sound or play loud music or noisy instrument or shout, sing or make any other loud noise after 10PM in communities to the annoyance or disturbance of others quoting Section 13 of the Public Order Act of 1965.

The police therefore called on the general public for support and compliance in ensuring a peaceful and crime free festive season for the benefit of all and sundry.

With Another Journalist Assaulted,...