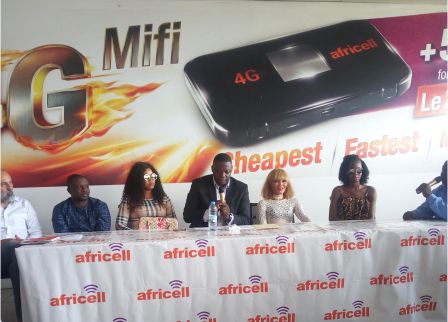 In his brief statement, Africa Young Voices (AYV) Chief Executive Officer (CEO) and President Ambassador Anthony Navo Jnr. said that Zainab Sheriff approached him with the Big Sister Sierra Leone idea and that he then called the Africell MD and explained the idea which he also promised to support.

He thank his audience and also spoke about the influence and partnership enjoyed by the two companies Africell and AYV.

Africell MD Mr. Shadi Gerjawni, thanked Haja Mariama Kamara aka China Nicki for her effort and at the same time spoke about how the online voting was done. He added that people voted from all over the world and this led to Sierra Leone being placed on the international map of fame because of China Nicki and that her life has now changed and because of that Africell is signing her as their Ambassador.

He also spoke about the Wuteteh Sunday promotion and Wuteteh Wednesday is the same promotion launched on Wednesday which offers unlimited calls from Africell to Africell. He used the opportunity to thank everyone that attended the program.

China Nicki’s Manager Ejatu informed her audience that she came to know China Nicki at Calaba Town when she launched the Sarah Cripple film about a year ago in which China Nicki featured. She thanked the organizers of Big Sister and that China Nicki will use her new-found stardom as a launch pad and foundation to improve the lives of her colleagues and younger ones.

According to China Nicki she said she used to admire Ejatu a lot and later met with Fukinbo though she knows that it is Ejatu that helped her change her life.

Aminata Bangura, a representative from Zainab Sherrif in her brief address thanked AYV and Africell for believing in her dream and helping her make it a reality.

Victor Lewis, a co-Manager of China Nicki spoke about how he came to know China Nicki and the support that he garnered for her from Sierra Leoneans in the Diaspora and thanked the numerous fans for voting in the best and favourite housemate, adding that her life will no longer be the same as she would now use her new-found stardom to change the lives of other women needing empowerment.

Joe Abass Bangura chairperson for the auspicious ceremony announced a package of 60 million Leones provided by Africell and a return air ticket to England to attend a program in the first week of November this year alongside the Minister of Tourism, Dr. Memunatu Pratt who will be leading the delegation, adding that Africell will support her to continue with her education.