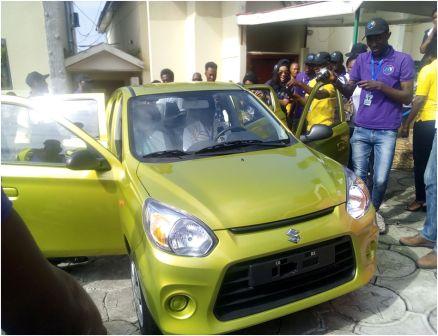 Africa Young Voices (AYV), in collaboration with Zed Zee production and proudly sponsored by Africell, unveiled the aforementioned as the star prize of the Big Sister Sierra Leone. Madam Stella Bangura chaired that well attended ceremony at the AYV headquarters. In her opening statement, she reaffirmed the general public of the star prize plus Le 10 Million for the winner. Dr. Duramani Ezekiel Lakoh, being the Managing Director of AYV, gave a synopsis of how this innovation all started. He said CEO Navo and Madam Zainab Sheriff shared their thoughts with AYV from the experience of Big Brother, adding that this ongoing dispensation in the house is helping us as Sierra Leoneans to see what the typical Sierra Leonean women are.  (Photo Of The Unveiled Zedzee Car With Staff Of AYV).

Alex Nalo- when called upon on behalf of Madam Zainab Sheriff, assured the audience of their relentless vision to change the narratives of women in Sierra Leone, as it is the main reason why AYV is playing the pivotal role being the Media Empire.  The Director of Media, Samuel Wise Bangura asserted when given the stage that the fundamental roles of the Media is to educate, entertain and communicate effectively and efficiently. He continued by expressing their zest to empower young ladies across the country. Mr. Bangura was delighted to enunciate that 12 young ladies have been given the opportunity to display their talents, devoid of the facts that they lack the needed influences, formal educational backgrounds, among others.

Africell’s Communication Manager revealed his organization’s passion to enable co-existence, creating more opportunities for young people, especially ladies to access as they have already started with the event that is presently stealing the show. However, he is encouraging subscribers to keep voting for their candidates and stay tuned. “Le 100,000.00 was initially paid to all participants with the exception of Saturday and Sunday but the said amount is now paid everyday”. Hypothesized the Manager.

Dr. Duramani Lakoh climaxed that occasion by unleashing that the ongoing Big Sister show costs over $ 250,000.00, with challenges when started but with a cliché in overcoming them. He propelled by conveniently stated that AYV is a school where young people debate on issues, with tolerance exhibited during those moments. In a nutshell, MD Lakoh disclosed that AYV is not only limited to “Nar in Salone sabi” but it has catapulted to “AYV is International”.