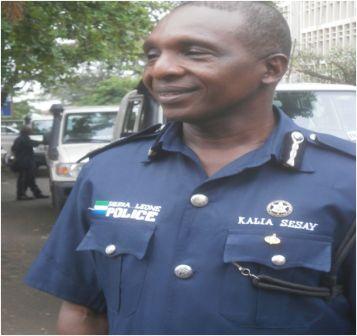 According to the ambiguous press briefing conducted by the Sierra Leone Police at its Headquarters on Sunday 9th September, 2018 by the Transnational Organized Crime Unit (TOCU) in collaboration with the Operation Support Department (OSD), Forces Intelligence Security Unit (FISU), Military Police(MP), Independent Media and Police Media, it was clearly stated that it was a vehement fight against cannabis sativa cultivation which resulted to the alleged shooting and death of an innocent 29 years old Abdul Kaimbay Kamara by security personnel. It was also alleged that the properties and monies of residents were carted away by security personnel, all in the name of raiding.

Based on exclusive interface by this press with the masses, the people are pondering over the manner and huge security presence in those villages as if they were going to the war front.

TOCU Head of operations for Team A, Emmanuel Cole updated the press that some youths ganged up against them and vigorously throwing stones at them, referring to them as thieves. Therefore, they were left with no alternative rather than did what they did.

Contrary to Mr. Cole’s submission, the Civil Society Maestro – in the person of Thomas Babadie hastened to update the audience that based on their intelligence, the people were completely harmless, shocked and dismay in relation with those orchestrated attacks, claimed to have been sponsored by State House.

When another valiant Civil Society Activist, Thomas Moore Conteh raised a genuine concern as to why the LUC was not informed prior to the operations within his Area Of Responsibility, the Head of TOCU- Mr. Sheku Kamara and the AIG who happened to be the Chairman for that briefing – Mr. Kalia Sesay (in phot0) responded with an outburst, stressing on the cordial relationship of the sacked LUC with the people as if he was not a professional. They used that as a reason for those unprofessional attacks on the vulnerable people.

After a series of critical questions posed, Emmanuel Cole contradicted himself relevant to the exact time of those targeted operations to such an extent by expressing that there were no thefts and he did not hear of any casualty but armed men responded. Furthermore, he affirmed that 34 suspects, of whom 6 were women, were scrupulously arrested with exhibits 709kg of substance suspected to be cannabis sativa, some quantity of fertilizer and 8 motor bikes and taken to the TOCU Headquarters.

The Consortium for Good Governance, Democracy and Human Rights (CGDH), exclaimed that the father of the deceased bitterly said that the SLP and RSLAF attacked the residents of Massengbeh and Matibo villages with 4 trucks and 3 vans full with security personnel, landed at Matibo, looted properties including motor bikes, groundnuts and other varieties. In a rather devastating mood, he cried out that his son was brutally shot dead because he refused to hand his bike’s key to the police.

In correlation with their press briefing, efforts made to calm the situation proved futile as the angry youths maximized their presence and became more aggressive to achieve their objective of preventing that exercise and freeing their colleagues who were arrested. At that stage, teargas canisters were released to disperse them but they resisted and continued moving towards the personnel.

An unidentified voice from the audience said “and in the end an innocent boy was killed and others seriously injured. Oh Salone Police”.  Referencing that same report of a press briefing, it was stated that as the team wanted to withdraw from Massengbeh village, a stone landed on the front windscreen of truck number SLP-332. Notwithstanding, the personnel narrowly withdrew to Matibo.

In the ensuing encounter, they said six police personnel were seriously injured, and 29 years old Abdul was shot dead, a huge number of harmless civilians were allegedly injured, and motor bikes and other agricultural produce were carted away by security personnel, though they were not mentioned in their report, as the list goes on.

By and large, the common Sierra Leoneans are referring to the police unprofessional killings as a norm and that such cruel act is becoming unbecoming. But since the matter is again under investigation, they are holding their peace whilst waiting for the outcome.

Over The Purposeful Victimization...