President Bio Engages PowerChina on the Construction of Lungi Bridge 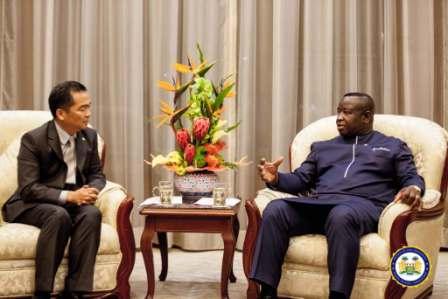 President Bio Engages PowerChina on the Construction of Lungi Bridge

Beijing, China, Friday 31 August 2018 – His Excellency President Julius Maada Bio has engaged the PowerChina International Group Ltd. on the construction of Lungi Bridge despite the fact that he has never promised it in his manifesto and campaigns.

The President, who had always kept the massive project very close to his heart, could not hide that sentiment weeks ago when a foreign delegation paid him a courtesy call at State House and he told them that he was actively looking for reputable companies to engage on the construction of a bridge linking the port city of Freetown on the Atlantic Ocean to the north-western airport town of Lungi.

During the elections as then Presidential Candidate, His Excellency President Bio was fondly remembered as the candidate who repeatedly stated that he would be a President who would ‘under-promise’ and ‘over-deliver’ rather than a President who ‘over-promised’ and ‘under-delivered’.

With so much of the manifesto promises he is delivering on, citizens now describe him as the “talk and do” President, a reputation he had earned throughout his public life.

Explaining the importance of the proposed Lungi Bridge, a passionate President Bio said that the bridge would open Sierra Leone for business and attract more investors and tourists.

He also said that Freetown was too congested and that the construction of the said bridge would not only reduce that congestion but would also promote economic development. He encouraged PowerChina International to consider the construction of the Lungi Bridge as a very important project that would bring huge relief to many Sierra Leoneans and make the country an enviable tourist destination.

Mr. Song also said that the construction of the Lungi Bridge would be an honour for their company and that they were delighted that President Bio was very determined to construct the bridge as that would also create many employment opportunities in the country. One major challenge for the construction of the Lungi Bridge had always been the financing aspect but Mr. Song assured President Bio that financing would be through off-balance sheet.

Also in attendance at the meeting was the Minister of Finance, Jacob Jusu Saffa, who was very pleased with the proposed financing of the construction of the Lungi Bridge, saying that off-balance sheet is the most internationally acceptable mode of financing as that would not incur any debt to the Government.

Updating the President on the proposed project as the focal person, the Chief Minister, Professor David J. Francis, said that while the proposed construction of the facility was the key priority, yet the whole package of the project would include the expansion of the airport and creating an economic free zone.

The Chief Minister said that constructing a bridge would mean increased traffic for flights and passengers which was why an expansion of the airport must go with the construction of the bridge.

Following a successful meeting, President Bio invited PowerChina to visit Sierra Leone for a more detailed discussion with the relevant line ministers and Chairman of Presidential Infrastructure, Dr. John Tambi. President of PowerChina International Group Ltd accepted the invitation and agreed that the company would visit Sierra Leone in October during which discussions would be held on a feasibility study, detailed financing and a technical meeting on the design with Dr. Tambi.

For many years, the construction of Lungi Bridge has been described as a political death-trap issue for past Presidents. For the first time President Bio, who even though did not promise to construct Lungi Bridge, in less than six months in office has shown passion and commitment no other President had shown before.

Press Secretary and Presidential Spokesman, Yusuf Keketoma Sandi, observed that the proposed bridge would be connecting Lungi, in the northwest of Sierra Leone, with the capital city Freetown, in the Western Area urban, pointing to another vivid example of a President who believes that developing a country should not be based on only developing his political stronghold.

Will Dr. Samura Cope With The APC...

President Maada Bio Where Are You?