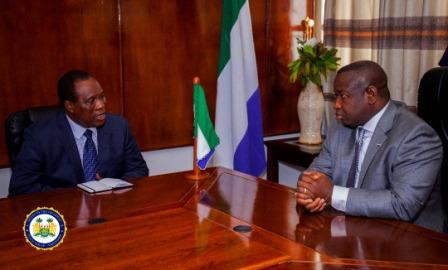 State House, Freetown, Friday 17 August 2018 – Head of Sierra Leone’s Permanent Mission to the UN, has called on His Excellency President Julius Maada Bio at State House to bid farewell as he takes up his new office in New York, United States.

Ambassador Dr. Francis Kaikai thanked the President for the confidence reposed in him to represent the country at the United Nations, adding that his appointment was coming at a crucial time when the New Direction was demanding that everyone does their best in moving the country forward.

Dr. Kaikai recently served as chief adviser and head of the peace consolidation services section of the UN Mission in Liberia.

He said he had followed the New Direction agenda keenly and believed in what it stands for while assuring the President that he would do his best to represent the government and people of Sierra Leone at the UN.

“United Nations is the global hub for multilateral diplomacy. I am fully aware of the challenges and the opportunities that lie ahead and how to exploit them in the interest of this country. In the New Direction, most of what you have outlined is very consistent with the Sustainable Development Goals of the UN and we will try to pursue that and make sure our narrative is in line with what is in the New Direction,” he said.

The new Ambassador, who is also plenipotentiary to Cuba and Mexico, mentioned that the two countries were also very important members of the international community and pledged to work with the Ministry of Foreign Affairs to deepen Sierra Leone’s ties with those countries.

Minister of Foreign Affairs and International Relations, Dr. Alie Kabba, thanked President Bio for appointing Ambassador Dr. Kaikai, whom he believed would represent the country well at the UN, a critical place to the country’s global diplomatic work. He said his ministry was excited to be working with someone of his calibre and therefore urged him to use his office to increase the country’s global footprint.

On his part, President Bio congratulated Ambassador Dr Kaikai on his new role. He said the task ahead was a very challenging one thus the reason he had decided to specifically choose him was because of his competence and wealth of experience.

He added: “Because of the multilateral nature of the United Nations job, I decided that you should be the best person to serve us at the New York station. We also want to deepen our relationship with Mexico and Cuba and we think you can play a critical role in that direction. We have some repairs to do to our reputation as a nation because quite a lot has been done over the years to damage our reputation but I have no iota of doubt that you will do a lot to bring us back to a respectable stance. Rest assured of our fullest support back home”.

Why Was Charles Francis Margai Cas...