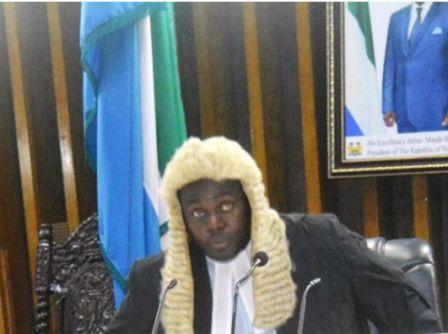 As part of its continued public hearings, in respect of the queries raised in the Auditor General’s Report of 2016, the Public Accounts Committee met today with some of the Councils in the Eastern Region.

The Chairman of the PAC, Hon. Segepoh Solomon Thomas (in photo) had issued stern warnings “that in future if officials working for Councils could not tender prudent transaction documents during audits, they will risk losing their jobs, including benefits such as NASSIT, subject to the conclusion of a stakeholders meeting, where the terms and conditions will be developed and agreed on”.

Speaking on over bloated contracts, the Committee spoke largely against profiteering by contractors “colluding with officials of Councils”, when deliberating on the construction of Kundi Bridge in Kono, with a value of of Le 790 Million.

The Committee has also restated that “sitting fees should not be paid to Councillors without minutes, attendance lists and valid written excuses “.

All the officials of Kono District Council have been summoned to Parliament not later than 24/08/18 in respect of the purchase of XL 125 motor bikes for Le 72 Million, four receipt books, and the provision of supporting documents for over Le 500 Million.

Hearings for Kailahun District Council were deferred  because of the absence of the suspended and former Chief Administrator and Finance Officer of the said Council.

Officials of Koidu New Sembehun City Council have been summoned to appear in Parliament on the 5th September 2018 because the “former Finance Officer is dead and the former Chief Administrator is seriously ill”.