We are disappointed with the Sports Ministry says SLDSF President 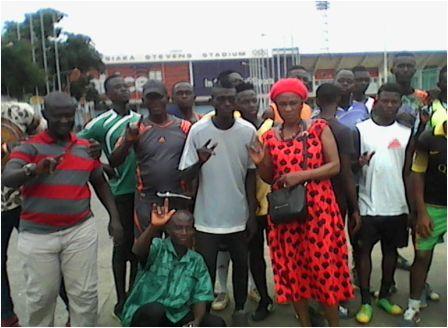 We are disappointed with the Sports Ministry says SLDSF President

President of the Sierra Leone Deaf Sport Federation (SLDSF), Madam Theresa Ramatu Sesay has expressed dissatisfaction over the refusal of the government through the Ministry of Sport, to support the Federation to participate in the eighth session of the West Africa Deaf Football Tournament (WADFT) in Lome, Togo this August 2018.  (Photo: From Left to right, President SLAD, Pa Alhaji , SLDSF, Madam Theresa Ramatu Sesay)

Madam Sesay expressed her frustrations during the final training session at the National Stadium Practicing field with a host of deaf players and administrators from the Sierra Leone Association of the Deaf on the 2nd August 2018.

According to the president, the federation has initially engaged the Ministry of Sport officially regarding their tournament’s preparation package noting that the federation has been able to manage the welfare of the boys throughout the training exercises through their own meager contribution and other support from philanthropists and private institutions. Section of deaf players at the National Stadium practice field

“We are disappointed with the ministry of sport for depriving deaf players who have trained vigorously under difficult circumstances especially with this golden opportunity tournament which comes on annually and the competition is almost coming to a kick off ahead of next week in Lome with other sister West Africa Countries’’.

She said, SLDSF may not participate in the West Africa Deaf Football Tournament because of lack of funds to take the players to Togo, where the competition is going to be staged and that Sierra Leonean deaf youth may be ruled out of the competition which might have exposed them to the rest of the world in the area of deaf football.

She appealed to government, sport loving fans and the general public to give a helping hand to promote deaf people and the country at large.

Did President George Weah Score an...