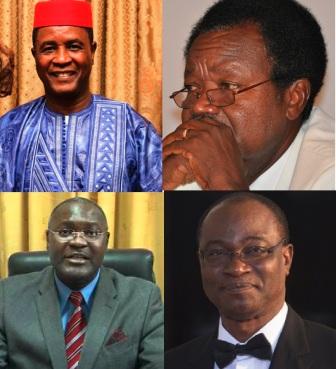 Sierra Express Media (SEM)  is quite optimistic of the fact that the deprived grassroots of the All Peoples Congress (APC) will agree with us that after the announcement of the presidential election run-off result, most of the party’s former Flagbearer Aspirants opting for the Presidential symbol have hibernated, leaving the daily affairs of their party in limbo, especially at this crucial moment of political intimidation, Human Rights abuses and constitutional violations among others. The disheartening question that nearly everyone is asking is where have the other APC former Flagbearer Aspirants with the exceptions of Dr. Samura M.W. Kamara, the deputy Chairman and Leader- Minkailu Mansaray, Joseph Fitzgerald Kamara and Dr. Kaifala Marah gone when their presence and relentless supports are in dire need of by the general membership of their party with their dedicated supporters?

In a random interview conducted by SEM targeting ordinary supporters of the main opposition All Peoples Congress (APC) Party, they bitterly registered their dissatisfaction by saying “now that the party is out of power they have left us in hot water but as soon as the party is back to power they will start coming like manners from heaven to lead us again. A good number of them are opportunists who have not gone through the hurdles of politics. This time around, we the ordinary members and supporters are well determined to put the records straight by calling things by their actual names. Our problem started by empowering some wrong people who do not have the ideology of the party at heart and lack the required empathy for the common supporters except in the middle of political seasons. When they are desperately in need of clout, they will spend their last penny pretending as if they care for us. Our people please see what is unfolding at present due to the neglect of the party by majority of our Stakeholders with its less privileged members and supporters who have given up everything just in the name of solidarity”

During our findings, we were informed that some of the party’s stalwarts are presently finding favours from this current regime by secretly unearthing the party’s confidentiality to the ruling SLPP functionaries. That alleged action is considered by APC faithful as completely outrageous and betraying to the party they say, has catapulted them in enviable positions utilized to amass wealth. The Commoners within the party are really appreciating those aforementioned Comrades who are standing by their sides during this truculent time. Special accolades were blissfully set free in favour of their former Presidential Flagbearer Aspirant, in the personality of Dr. Samura M.W. Kamara for embarking on that timely Agricultural project gearing towards abundant food production as the nation is going through unbearable hardship.

Conclusively, the people are still opining on the rising level of selfishness and greed as the fundamental factors responsible for their political misfortune and that they are neither seeing symptoms of redress from those that were inspiring them nor their presence. The ordinary supporters have emphatically emphasized on the slogan in our local parlance “Babu Wok babu it en wi dae wait for some man den wae go wan kam shake shake pan we 2023. Now nar we dae sok unda rain en warm unda san but we dae watch en rayt some tin dem for tumara bambai en we go know if nar sweh we get”. Precisely and fair enough, they have patiently expressed their grave concerns. Those that are guilty of such selfish and heartless acts, you have been warned. As the common adage reads “It is better late than never,” meaning there is still room for improvement.