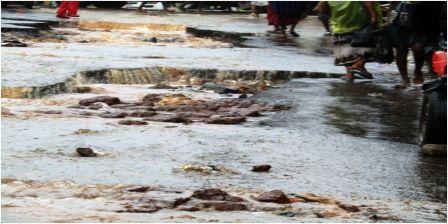 The current poor status of the road leading to Sani Abacha Street, opposite the  Clock Tower and the Eastern Police Station in Freetown leads to vehicles and Keke being trapped in the middle of the road due to the heavy down pour of rain.

Street flooding on Wednesday and the bad condition of the road led to some munities standstill for Keke rider Osman Kamara together with the three passengers on board. The trapped passengers were in a state of dilemma not sure whether to get down or wait in the middle of the road as the rain intensified amidst the poor condition of the road which prevented them from moving further until the keke was pushed to clear the way.

Osman Kamara expressed his dissatisfaction over the lack of maintenance by the Sierra Leone Roads Authority (SLRA). He called on the new direction administration to quickly do something about the road noting that SLPP should not allow the legacy of the past APC government to go down the drain. However, citizens interviewed on the issue have criticized the administration of the Road Maintenance Fund which they claimed is not doing well to maintaining the roads and drainages in the country. Aminata Turay called on President Bio’s government to put the road maintenance fund administration on its toes to ensure pro-activeness in its responsibility to look after the roads as it receives Billions of Leones to perform its road maintenance function.

All efforts to engage the Road Maintenance officials proved fruitless unto press time.

With Increase in Crime in Western...