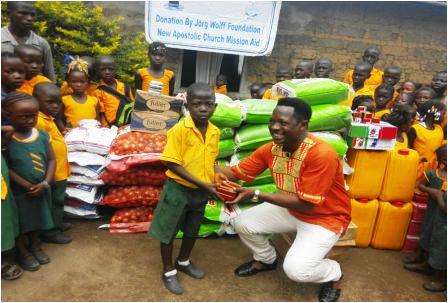 The Jorg Wolf Foundation through the New Apostolic Church Mission Aid (NACMA) has concluded a nationwide distribution of food items and non-food items to different poor and hard- to -reach communities in the country. The communities that benefited were: Magburaka disability  camp and Magbass in Tonkolili district; Gandorhun in Kono, Orphanage in Kenema, Pendembu and Mendekeima in Kailahun, Bathurst in Bo, Mokonde-Njala in Moyamba district and Lungi-Maherra in Port Loko district respectively.

This came out of the request of the Apostles and Bishops of Sierra Leone to the Regional Supervisor, Mr. Samuel A. Cole, who forwarded it to the donor in Germany. Mr. Charles Nyandemoh, the church Accountant and the Church Secretary Mr. Abdulai Kenawah Sannoh supervised the distribution.

The donation geared towards complimenting the efforts of the government to fight against hunger and poverty in remote and hard-to reach- areas in the country.

During one of the donation ceremonies held at the Shepherd Foundation Primary School at Maherra in Lungi, Port Loko district, witnessed dancing and singing by community people who came out in numbers to welcome the team from the church led by newly ordained Apostle Brima Siaffa.

Making his statement, Apostle Brima Siaffa, thanked the community people for the warm welcome accorded them, adding that this was his first time of visiting Lungi-Maherra.

He explained that every year the church with funding from Jorg Wolf Foundation to Africa, has been giving humanitarian gestures to less privileged communities, the aged and destitute children in orphanage homes across the country.

The Church Clerk/Secretary,  Priest Sannoh, said that similar donations was also done in Liberia, Guinea and Ivory Coast (Cote d’Ivoire) to minimize the sufferings of poor people who can’t afford a meal a day for their families. He said that one of the devastating effects of the Ebola outbreak has left many people poor.

Priest Sannoh explained that Jorg Wolf is one of their Retired District Elders that is giving back to poor people from the profit he is making out of his business.

Receiving the items on behalf of the community, Retired Apostle Alex Bangura thanked the church for choosing the Masimera community to do their donations.

He added that the church is the first religious organization that has made such a valuable donation to them especially at this time when it is raining.

A blind old woman, Mamie Fatu Bangura, was filled with joy when the food items were given to her. She said “I have been thinking of how to survive this rainy season since I stopped begging from house to house”.

Mamie Fatu, though a Muslim appreciated the church for remembering them at this time of the rainy season when hunger is at their door step. She calls on other organizations to emulate the New Apostolic Church.

As Sierra Leonean and Congolese Di...