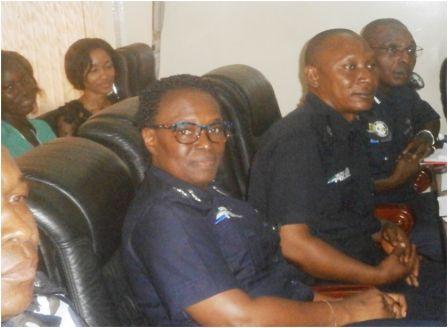 The Director for Corporate Affairs in the Sierra Leone Police (SLP), Assistant Inspector General (AIG) of Police, Memuna Borah Konteh Jalloh has countered rumor peddling by some unpatriotic people that on one occasion, she unlawfully diverted President Bio’s motorcade from Kissy Road to Fourah Bay Road in Freetown.

AIG Memuna Konteh Jalloh made the statement yesterday when she was responding to a statement imposed to her by one Mr. Sitta Turay who described himself as a law student.

According to the Iron Lady as she is described by peace loving Sierra Leoneans as a sign of honor, she stopped a bunch of robbers who were singing songs with hate messages adding that she did not even see Brigadier Bio at the time.

“I always work professionally and stand by my action”, said the no-nonsense female officer and admonished detractors to stop focusing on patriotic individuals.

AIG Memuna argued that her job as a Police officer mandated her to protect any Government in power as well as members of the opposition without fear or favor.

AIG Memuna became popular among meaningful citizens for her astute leadership role in enforcing law and order. In fact that is why she is called Mr. Memuna because she has no friend when executing her constitutional duties.

When she was Commander of the East, Memuna Konteh Jalloh was able to curtail crimes by displaying the rule of law.  She was the first female Police Officer to weed out street traders from certain strategic streets in the Eastern part of Freetown including College Road at Water Quay.

AIG Memuna is a force to reckon with because she is adding value into the Sierra Leone Police force as she trained junior officers to become respectable police as a Force for Good.

Many people believe that AIG Memuna Jalloh is growing every moment because she is very much passionate about her job and the protection of lives and property. As people in one country, it is good that we stop detracting good people in society who have the country’s development at heart.

Leave Max Brandwain Alone As He Is...

As Sierra Leonean and Congolese Di...