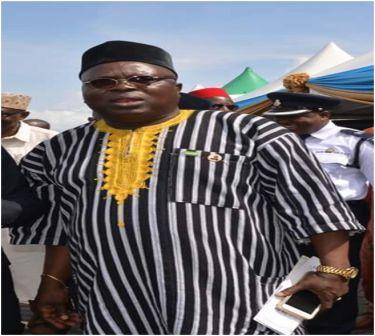 APC political dinosaur, the APC National Elections Coordinator and former Minister of Transport and Aviation, Leonard Balogun Koroma (in photo), popularly known as Logus has incisively and strongly responded to allegations made against him as contained in certain sections of the Governance Transition Team (GTT) Report, referring to them as out of context and absolutely having no merit.

According to the report, with specific reference to Page 27 (h) and page 28 which has to do with the procurement of 100 buses in China it made mention that the former Minister be investigated for negotiating ,what it describes as an extortionate contract suggesting that corruption was his key motive.

Cogently reacting, Logus clearly pointed out that in relation to the issue, the Anti-Corruption Commission ( ACC) conducted a criminal investigation into the matter in 2015/2016 furthering how he believes that the issue was comprehensively, exhaustively and conclusively investigated and a report issued on  5th January, 2016 which was signed by the then Commissioner of the ACC , Joseph Fitzgerald Kamara.

The former Transport Minister disclosed how a highlight of the findings as mentioned by the then ACC Commissioner contained an important aspect:

“ Upon review of the totality of the evidence , the Commission is of the considered opinion that members of the Procurement Committee did not act willfully or negligently, as required in law to warrant criminal prosecutions . The legal authorizations occasioning approvals, such as “No Legal Objection “from the Solicitor General to the contract documentation, negate the exercise of prosecutorial discretion.”

Logus reiterated that, according to the Report, it is clear that 100 buses arrived at the Quay and they were actually supplied, licensed and insured.

He added that with regards questioning the price he had earlier maintained the indisputable fact that the issue was “conclusively and satisfactorily investigated by the ACC in its entirety and closed without any prosecutions, apparently because the body that has the statutory responsibility to investigate such allegations and prosecute on behalf of the State considered it unmeritorious to prosecute.” He again noted that it could have been that the evidence was either insufficient or lacking to warrant a prosecution.

The former Minister of Transport affirmed that the delegation that negotiated the prices for 100 buses in China included the then Director of Debt Management, Sahr Jusu, now Financial Secretary, whom he said was an integral part of that delegation.

“He was sitting on the high table during the critical and highly technical financial negotiations,” he underscored.

Another allegation levied against the former Minister states that the Sierra Leone Road Transport Corporation (SLRTC) was marginalized by him during the negotiations leading to the contract.

In his response, Logus fired back by highlighting that such is far from the truth stressing how it is virtually impossible for the General Manager of SLRTC to be marginalized when he was the first to give his ‘no objection’ to the 100 buses proposal, serving also as the focal person to prepare and sign the customized specifications requirements for the 100 buses. He reiterated that the GM was part of the negotiating team to China and sat at the high table during negotiations.

The former Minister stated that the allegations above in addition to being already thoroughly investigated and concluded have absolutely no merit.

It was again alleged that in 2015 alone the Sierra Leone Commercial Bank wrote off Le29.7 billion as bad debt – that is loans it had given to Senior APC officers and Ministers which it concluded will never be repaid.

Among the debts it wrote off was one to Africa Sunshine Limited, which is owned by Leonard Balogun ‘Logus’ Koroma and Alex Mansaray , amounting to over Le3billion“.

He vehemently denied that he does not owe the Sierra Leone Commercial Bank any amount of money, let alone Le3billion.

“I challenge the Sierra Leone Commercial Bank & the GTT to produce the relevant documents to prove that I owe any such debt or that I jointly own Africa Sunshine Ltd ,” he authoritatively mentioned.

He called for the office of the Administrator General or the Corporate Affairs Commission to be checked in order to clearly find out that he does not own nor has shares in Africa Sunshine Ltd.

He stressed that the aspects mentioned against him are materially flawed and ill-conceived and sparks of a witch hunt which must be avoided.

“I am prepared to clear my name of any allegation of fraud, corruption, corrupt motivation or abuse of office for personal gains. I pray that people in positions of power should not abuse their offices. What happened in April 2018 is not a military take-over,” Logus expressed determination and averred.

He ended by preferring advice for the rule of law to be respected saying he will welcome any legitimate judicial enquiry, especially one that will be holistic and covers everything so that lessons may be learnt by all citizens about how good and hardworking men can be destroyed with political propaganda.

“If we do not correct this , witch hunt ( “ we must get him“) mentality now , it will continue to be a repetitive syndrome in the politics of our country anytime power changes hands , which is inevitable , and will not augur well for our hard won peace , political stability and national cohesion,” Logus further admonished.

It is on record that, as man of the people, Logus is one of the magnanimous political figures within the former APC led Government who rendered tremendous assistances to people from different walks of life some who were not even members of the party. He succeeded in winning the support of many to the fold of the APC as a party and was very instrumental in upholding inter and intra party cohesiveness. A kind hearted personality he most times displayed compassion for the less privileged.

One thing which he has been notable for is that it was during his tenure that the number of commercial aircrafts started operations in the country thereby contributing towards job creation and providing avenue for Government to derive more revenue from the aviation industry.

As SLPP Alagbas Excluded Over Sale...