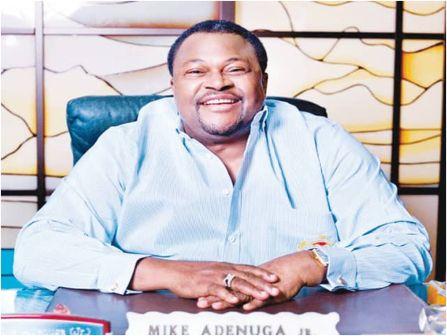 French President Emmanuel Macron on Wednesday 4th July 2018 conferred on Nigerian Business magnate, Mike Adenuga the highest French National Honour, Commander of the French Legion.  The investiture was done during the unveiling of the Alliance Francaise Centre which is housed at the Mike Adenuga Building, Ikoyi.

Dr Mike Adenuga, Chairman of Nigeria’s second biggest telecommunications network was described by the French President as ‘a true role model for Africa’. His business interests span from telecoms to banking and finance, oil and real estate.  His Globacom network is a household name in the telecoms world and pioneered the per second billing in Nigeria and presently has operations in three other African countries.  Glo-1 High Capacity Submarine Fibre Optic Cable cost his company 800 million USD and   His successes have been recognized far and wide. He is a recipient of the Grand Commander of the Order of the Niger (GCON), as well as  the  Companion of the Star of Ghana (CSG), Ghana’s highest honour.

Born in Ibadan to Mike Adenuga sr a Teacher and Mrs.  Juliana Oyindamola Adenuga a business woman, the young Adenuga attended school in Ibadan and later proceeded to the US.  Popular belief has it that he honed his business skills from his mother.  He is astute, sharp and focused and is a firm believer in hard work.  Never one to shy away from a challenge, he faces any new project with determination and always aim to succeed. To admirers, he is nicknamed the Bull and that can be seen in all his official correspondence.  Dr Mike Adenuga is an affable person and never shy to regale his audience of his humble beginnings. In conversations, he is quick to let the listener know that he worked as a taxi driver to support his schooling in the United States.

A lover of Sports, he has sponsored many sporting events and hosts the Annual CAF Player of the Year Awards in Benin. He has sponsored The Super Eagles, recognized and honoured by the Management and staff of Manchester United for his support and contributions to the development of soccer in Africa.

Africa is indeed blessed to have such a great entrepreneur and as he himself is quoted as saying “Our aim in my set up is to find the visionaries of tomorrow. We want to find and nurture young people with the ideas and the drive to make a difference in Africa, in a really hands on way”.

Our Words Should Be Translated Int...