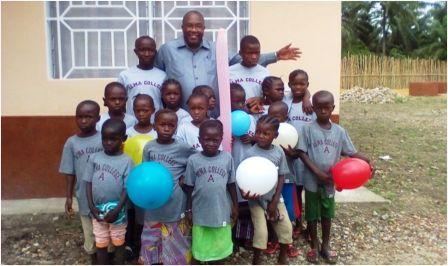 The Member of Parliament representing Constituency 052, in Gbonkolenken, Yele Chiefdom, Hon. Dr. Abdulai B. Daniel Sesay commonly called Dr. ABD has on Friday 29th June 2018, commissioned four (4) self-contained apartment buildings for twenty (20) Ebola orphans at Makakensa village in Yele Town, Tonkolili district. The great heart Member of Parliament noted that; during the Ebola surge, he met a friend with 2 kids that has lost both parents and asked him “what could he render as Member of Parliament. That touched my heart,” said the MP. He realized that the kids did not have a brighter future and decided to contact his friends in the United States of America where the idea was borne to build a child health care centre called Foot Print Mission Sierra Leone. The primary objective was to take care of affected orphan children by the Ebola Virus Disease in recent years to ensure betterment in their lives, good quality education, health, with social supports among other things.

In an exclusive interview, Hon. Dr. ABD Sesay noted that, he was assured by his friends in the USA to provide funds for the children and constructed four solid self-contained buildings that will actualize his dream and plan. The new lines of life for the children’s welfare, the MP further stated that; the children have now got promising future. He added that he will ensure, the children continue to have quality education from primary one throughout university, noting that those that may be unfortunate to go to university will also be provided with basic support skills.

He went on to say that they have set up skills training programs including tailoring, carpentry masonry and agriculture. That astute Member of Parliament described that day as a golden opportunity with special thanks and praise to the Almighty God that in 2009 he received an email from a male friend in the USA that have intended to visit Africa which he facilitated alongside his team of vacation. They operated together at the Magbenteh hospital- Makeni after a successful giant inner operation at Gbonkolenken where the team also invited him to the United States of America. He said. “I prepared a presentation together with Dr. Edri Huizengo called “Unity in Diversity”, analyzing the health practice between Africa and the United States. Hon. Dr. A.B.D. Sesay went on to affirm that, all the children at the center falls within the Constituency with reserved ten (10) acres of land  for agriculture and hence- the betterment of farming. He added that opportunity will also be given for those that will be fortunate to go through university level to give back to the society.

The philanthropic MP despite the 11,000 lives that have been claimed by Ebola in West Africa he said that, the less privileged children have been faced with serious challenges. According to him, they needed people. The biggest challenge the Ebola has put into our country was the loss of two parents which other vulnerable people in the community should also be given back to our society.

He called on other philanthropic counterparts to do likewise to give to the community, hence complimenting government efforts to create job opportunities. According to him, he has currently employed over 40 people in his private hospital at the City Garden Care College road, Makeni. He lamented. “Learning possible lessons emanated from Ebola”, the MP Hon. Dr. A.B.D. further advised government for a healthy nation – thus government should invest on the health sector to ensure front line surveillance nurses, emergency responses, contact tracing among others that he considered was a major setback in the health system of Sierra Leone as well as lack of diagnostic equipment to be able to identify any strange disease like laser fever among other things. He emphasized on the practice of hand washing for the prevention of non-communicable disease with modern hospital settings as a structure been setup during the fight against the Ebola Virus Disease.  He was continuously calling on government to pay greater attention to invest on the health sector towards disease surveillances to control and address outbreaks that will not escalate to ravage the country in the health public sector. That political philanthropist MP, who is also an entrepreneur further explained plans to be put in place in enhancing the establishment of the child care center initiated by Mariatu Conteh and Fatmata Conteh respectively noting that mechanisms have been put in place to help communities . “I have people just like I started at Magbenteh hospital including the Oil plantation which the people of Gbonkolenken are currently benefiting from. The oil production which is a great source of income for sustainable development as well as electricity and water supply he added.

We are currently working on the carpentry and tailoring projects while training people to become self-reliant to promote sustainable development for a continual starting point. Speaking on the set criteria, Hon. Dr. ABD Sesay disclosed that the project costs about $100,000.00 and also stated that there were records during the outbreak.

The mission conducted its survey register on one- on- one undertaken by one of the American counterparts, Daniel Lynch, followed by the project manager Joseph L. Conteh and verified by the Ministry of Social Welfare, Gender and Children’s Affairs based in Makeni for true orphanage enrollment policy despite series of attempts were made.  He called on every Sierra Leonean to come and work together, as he believes to help each other, be a brother’s keeper and build our health sector as he said “United We Stand, Divided We Fall” and expressed his dissatisfaction over people who suffered and died in other countries such as the Mediterranean Sea.

He also described the act as sad and disheartening for the development of Sierra Leone. There are several opportunities in this country and appeal for a change of attitude to work together for the betterment of the country particularly those that are fortunate to give back to their communities by creating institutions that employ people. By so doing, the burden on government should have been reduced drastically and would have also helped government through tax and revenue mobilization for the development of the country as other developed countries. That program was attended by several key stakeholders including the Foot Print Mission Sierra Leone and representatives from the USA, in the persons of Dr. Erdi Huizenga, Mr. Rudi Van Rooijen and Daniel Lynch. The Paramount Chief of Gbonkolenken (P.C. Bai Suntuba Osara III), the newly elected Secretary General from Rotary Club, Emmanuel O. K. Tholley, representative from the Ministry of primary education, representative from the educational council, Student from Alma college among others including the Ministry of Social Welfare Gender and Children’s Affairs (MAWGCA)- Madam Bendu Gassama who was the keynote speaker. She expressed her thanks and appreciation in diverse ways for the successful completion of the project and went on to say that the issue of children in Sierra Leone is her utmost priority. She applauded the MP for his achievements which aimed at rescuing children that are highly in need and commended him for complimenting the President’s flagship priority of quality free education. She promised that her ministry will work closely in line with the mission to provide relevant support for the educational development of the children and encourage the children to make great use of the opportunity. According to her, being an Orphan is not the end of life. The Minister also continued to warn that men should stop the habit of raping young girls at their early teens and that whoever that is caught raping any woman would be sent to jail, and cautioned parents not to compromise with any defaulter once there is enough evidence. As the New Direction will no longer tolerate such crime before she officially opened that well decorated center.

Sexual Penetration On The Increase...