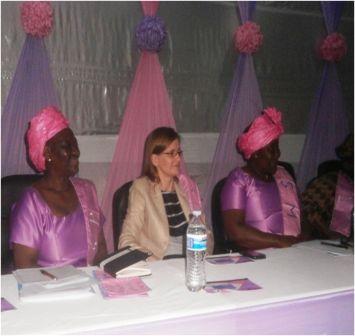 According to the program of event, President Bio was to serve as Guest Speaker but was not in attendance and nobody represented him.

Nevertheless, the program was fruitful as it was graced by not only former flagbearer of the National Grand Coalition (NGC), Alhaji Kandeh Kolleh Yumkella and members of the main opposition, All People’s Congress (APC) stalwarts including the former Minister of Information and Communications, Alhaji Alpha Kahn, former Government Spokesman, Ajibu Jalloh, former Minister of Public and Political Affairs, Nannette Thomas among others.

Sierra Leone became the first Africa country to adapt the Women Shadow Parliament after Kenya with the aim of advocating for more women to be included in public service.

It is crystal fact that the Government of President Bio has recorded the lowest participation of women in governance than any other regime in the political history of Sierra Leone.

During the ceremony, the British High Commissioner for Sierra Leone, Guy Warrington spoke on the important to increase number of women in Parliament and emphasized on the UK plan to work with the new Government. Representative of the UN Women in Sierra Leone, Dr. Mary Okumu  emphasized that WSP-SL is a mechanism that would facilitate women solidarity and disclosed that political parties remains an important vehicles to enhance women participation in politics.

The Deputy Head of European Union, Ingha Kastina expressed spoke on the important for women present to be felt in any development sector and advanced that it is not equality when women are starve from enjoying basic facilities. She therefore encouraged women to support each other and pledged UN support to the struggle of Sierra Leone women for inclusiveness in public service.

In her opening remarks, Chairperson, WSP-SL, Dr. Bernadette Lahai acknowledged the presence of distinguished local and international dignitaries adding that the idea of establishing the organization has started quite sometimes but it becomes crystallized after the 2018 general elections.

She pointed out that effort to improve women participation in public services has not yielded the required dividend and mentioned that the WSP-SL conceived to address pertinent questions affecting women. She reiterated that the WSP-SL would help women to make their voices heard in the decision making process.

However, Dr. Bernadette Lahai recognized all stakeholders from political parties and other spheres of life for attending the occasion. The launching ceremony of the Shadow Parliament was witnessed by many women organizations including Women Forum Sierra Leone, 50/50 Group and among others.

SLPP Imposes Francis B. Kelfala as...