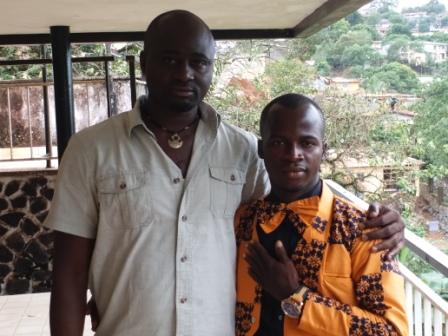 In an exclusive interview with Sierra Express Media on rumor doing rounds on Social Media that, the newly elected Councilor for Ward 308 in Bonthe District, Daddy Vondor debunked false statement that he has abandoned the APC which gives him a landslide victory and defected to the ruling Sierra Leone Peoples Party (SLPP), a party Vondor said has denied him symbol to contest the 2012 election.  (Photo: l-r Sierra Express Media CEO Adeyemi Paul and Bonthe District Councillor Daddy Vondor)

He explained that he was inundated with phone calls by no less a person but the Deputy Speaker of Parliament, Solomon Sengehpor and cohorts called him with the pretext that President Julius Maada Bio wants to meet with him.

At this stage, Vondor said while discussing, President Bio in a vexed mood shouted at the Deputy Speaker of Parliament that why do you sit and allow a young boy like Mr. Vondor to defeat you in flying colors in the much talked about local council election right inside the birth place of Mr. Solomon Sengehpor, President Bio and the Minister of Finance, Jacob Jusu Saffa aka JJ Blood?.

After the interactive sitting, Councilor Vondor said, President Bio requested to have a snap shot with him and he said he responded to him. Vondor said after he was embarrassed with phone calls, he decided to drive to Freetown to tell the true story which he has done.

According to Vondor, he never declare to join SLPP but pledged to support President Bio for development because, he said “He is my brother”. Mr. Vondor said nobody could change him because he was chosen by his people as a result of his hard work.

How can I defect to a political party which has denied me an opportunity after winning election with flying colors?, asked the new councilor and described his trumpeted defection to the SLPP as a blatant lie.

According to Councilor Vondor, during the Election Day the overwhelming state security personnel deployed by the Government scared the people but they were able to make their decision in the ballot box.  He said, at the height of the election campaign, the Deputy Speaker of Parliament called and begged him to step down but he refused to maintain his integrity and credibility or trustworthiness.

Sengehpor said he has no security problem because he is a son of the soil who born and breed in Bonthe District and nobody would be able to divert his attention to join wrong direction.

Over Dissolution of All Boards of...