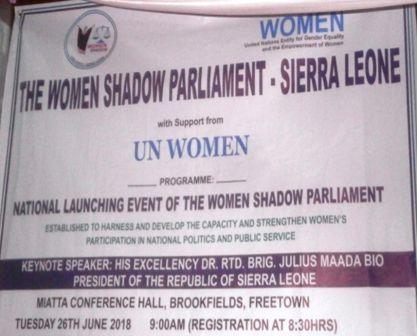 The Women Shadow Parliament-Sierra Leone supported by the United Nations Entity for Gender Equality and the Empowerment of Women (UN Women) has been officially launched at Miatta Conference Centre in Freetown on Tuesday 26th June 2018 with the theme “Harness and Develop the Capacity and Strengthen women’s participation in national politics and public service”.

In her opening remarks, Chairperson, WSP-SL, Dr. Bernadette Lahai acknowledged the presence of distinguished local and international dignitaries adding that the idea of establishing the organization has started quite sometimes but it becomes crystallized after the 2018 general elections.

She pointed out that effort to improve women participation in public services has not yielded the required dividend and mentioned that the WSP-SL conceived to address pertinent questions affecting women. She reiterated that the WSP-SL would help women to make their voices heard in the decision making process.

The former Member of Parliament intimated that WSP-SL is not here to compete with other women organizations and emphasized that their membership is overlapped with many women including former parliamentarians, Councilors and would be aspirants. The British High Commissioner in Sierra Leone, Guy Warrington said the 100 anniversary of UK Women is celebrated and emphasized on the manner in which people are tortured and killed in their move to protect rights of women.

He maintained that Sierra Leoneans are proud to hold free, fair, peaceful and transparent elections and encouraged the new organization to pay attention on women elected in the new Government. He spoke on the important to increase number of women in Parliament and emphasized on the UK plan to work with the new Government.

Representative of the UN Women in Sierra Leon, Mary Okumu who delivered good will statement from the UN Family said WSP-SL has been officially constituted and discussed that the organization aimed at equipping women who are interested in politics. She emphasized that WSP-SL is a mechanism that would facilitate women solidarity and disclosed that political parties remains an important vehicles to enhance women participation in politics.

She commended UN Women for supporting the initiative and reiterated UN commitment to support women participation in society and politics.

The Deputy Head of European Union, Ingha Kastina expressed gratefulness for representing the European Union delegation and described the previous election as important for the development of the country. She dilated that the involvement of more women in governance is one of the major recommendations of European Union Election Observation Mission (EU EOM)

She spoke on the important for women present to be felt in any development sector and advanced that it is not equality when women are starve from enjoying basic facilities. She encouraged women to support each other and pledged UN support to the struggle of Sierra Leone women for inclusiveness in public service.

Resident representative of FAO described the formation of WSP-SL as a great initiative adding that women have diverse responsibilities from home, in politics and social commitment. She deliberated that the Shadow Parliament is a way to see that women are empowered for the next elections. She said it is known globally that 60% of food is produced by women. “I am happy that the new Government prioritized agriculture”, she told audience.

She admonished to include rural women in agriculture for their voices to be heard and ended by emphasized that one day Sierra Leone will be able to feed itself through our women in farming.