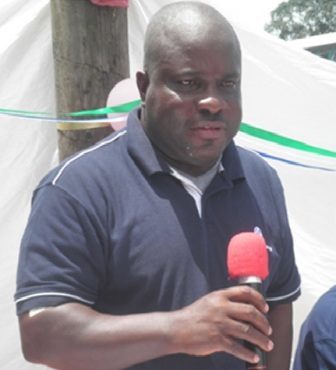 Document leaked to Sierra Express Media revealed that, the current General Manager for the Sierra Leone Road Transport Corporation (SLRTC), Bockarie Lewis Kamara (in photo) received Le3.122 billion in July 2015 as start-up capital for the operation of the procured one hundred buses.

According to leakages, it is disheartening to note that this money was grossly misappropriated by not doing what was actually required of the money.

The document explained that the Junior and intermediate Staff Association of the Cooperation are praying for the current Government of President Retired Brigadier Julius Maada Bio to sack Bockarie Lewis Kamara with immediate effect because he continues to dismiss staff members he perceived to be members of the Sierra Leone Peoples Party (SLPP).

The Deputy GM who was caught up at the SLRTC entrance in an official vehicle replied that he has right to respond to any allegation made against the cooperation but he was not in position to speak to the media.

Mr. Tarawallie promised to call and meet with the Journalists the following day but to our greatest surprise, Mr. Tarawalie made no attempt to call anyone until press time.

However, as a trusted place for news, Sierra Express Media is always ready and willing to have the response of the GM, Mr. Bockarie Lewis Kamara or the Corporation.