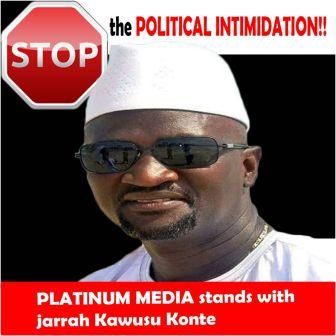 The former State House Communications Boss under the Ernest Bai Koroma led All Peoples Congress (APC), Jarrah Kawusu Konte, like many other personalities and officials of the past government, is the latest to fall prey to the senseless and uncalled for political intimidation, victimization and brutality of the current Sierra Leone Peoples Party (SLPP) administration led by the former junta leader, Brig. (Rtd) Julius Maada Bio.

Mr Kawasu is now a subject of police investigation over a crime that many have referred to as a non-existent crime.

According to Mr. Konte, he is under investigation for posting on social media, a memo from State House that was released by the former Secretary to President, Mr. Dennis Vandi regarding the suspension of the 2016, 2017 &2018 Finance Acts; a crime the Police say is  as an economic Sabotage.

It could be recalled that on the 24th of May, 2018, a State House Memo was in circulation on both social and the traditional media having to do with the aforementioned Acts. But unfortunately, the said memo met serious criticisms from all sectors of the public for the fact that it is considered as treasonable. ‘’It is as a result of the said memo that I reposted on social media that I am now facing charges’’, he bemoaned adding that it is nothing but a crack intimidation from the government to silence any form of opposition. ‘’ how can I be the one to leak the information when I am no longer working at State House’’ he questioned and concluded that no amount of intimidation will stop him from saying the truth.

On the part of government, the information Minister, Mohamed Swarray, when asked by this medium about his knowledge over the issue denied having any idea about the arrest and affirmed that there was no such order to warrant the invitation of Mr. Konte at the CID.

Contacting the investigating Officer for his respond over the said issue, he declined from making any comment and advised me to accompany Mr. Jarrah Kawusu Konte to the CID when he was making his first appearance.