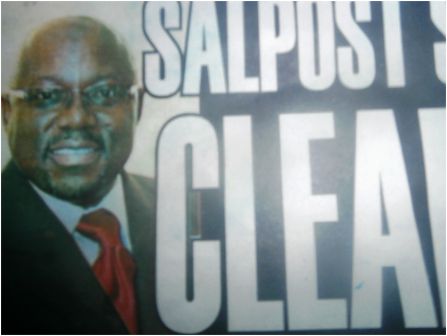 Following the barrage of allegations against the substantive Consultant Managing Director of the Sierra Leone Postal Services (SALPOST), Samuel Koroma (in photo), it was now very clear that they are not true just that some ill motivated workers are not happy about the changes that is ongoing at the institution.

Recently, he was asked by the Minister of Information and Communication, Honorable Mohamed Rahman Swarray to step aside and allow the investigation to go on, but with reliable sources at the Ministry of Information revealed to this medium that Mr. Koroma only receive 5 billion Leones in tranches to overhaul the institution not 7 billion Leones as alleged by some of the workers.

According to some sources at SALPOST, who commended the Mr. Koroma for prudent administrative strategies believed the said money was judiciously used to address every challenges of the institution.

As a result of his expertise in Postal Administration, Samuel Koroma was hired by the previous Government as request to the United States Postal Services that he was working for in very senior management position. But with the request from the Government he accepted, though the US Postal Services never wanted him to leave but in view to contribute meaningful to overhauling of the dysfunctional institution he decided to come being a patriot. Sources familiar with the happenings at the SALPOST informed this medium that Samuel Koroma upon his arrival in 2013 brought 3 containers of valuable equipment like computers and accessories that he got from the US Postal Service to improve on the institution which some of the disgruntle workers stole since then he has been frowned at this act. He has been enjoying a good working relationship with the Universal Postal Services (UPS) for many years, thus bringing in a lot of assistances to the country.

However, some of the ill motivated workers at the institution because of Samuel tough position against certain unwanted deeds displayed by some of the said workers warranted protest action and his exemplary leadership worried most of them, but he believes in the change. Because of his condemnation of certain heinous practices, which he did not encourage, one of which includes pilfering of mails cause them to be bitter with astute manager.

It is clear that SALPOST is synonymous to protest action before Samuel appointment to that particular office. If these will have been possible the postal regulation would have been successful.

Some of the sincere workers at the institution, they extolled Samuel Koroma for bringing concrete development at SALPOST.

Before accepting the post office job, he was making millions of dollars in the US Postal service and the Government accepted to pay him round the $ 6000 not the Le 78,000 million that was making rounds in the social media.

In view to robustly effect change he catalogue series of reforms mechanism he wanted the then Government to approval issues ranging to the establishing of commission to regulate the postal services in the country, to repealing of the law of SALPOST. Government to instructs National Commission of Privatization to return the money received out of the parcel post building sale, Board of Directors not to interfere with the day-to-day running of the council, SALPOST management should engage in the Public Private Partnership to fulfill its government among other things. Samuel Koroma was able to bring several reforms, improving on welfare of staff, increasing salaries of all members of staff and the prompt payment of end of service benefits.

With his efficiency in postal administration, he was able to secure standard Buses which are now playing vital role in the country’s transport sector.

Another Rebellious Display As SLPP...