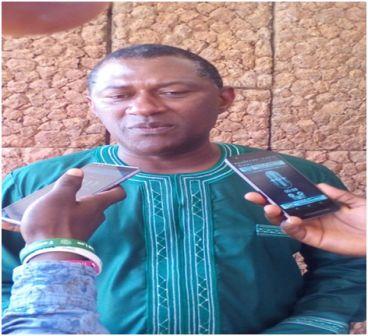 The Deputy Minister of Transport and Aviation, Sadiq Sillah was one of the public officials that arrived late when His Excellency Retired Brigadier Julius Maada Bio paid an on the spot check recently at Youyi Building in Freetown.

Mr. Sillah was spotted forcing his way to enter Youyi Building through Old Railway Line gate, opposite the Environment Protection Agency (EPA) office but he could not get inside as the President had ordered security personnel to close the two entrances and must not allow anyone to enter until he leaves.

Shamelessly and panicky, the Minister together with other lazy workers were standing outside the gate appealing to the reluctant security officer to open the gate so that they could clandestinely enter Youyi Building but the security personnel insisted that he was not in position to flout the order of the President.

The Minister stood outside the gate for a while before he moved to the other entrance where he was fortunate to get inside immediately the President left the vicinity.

Sadiq Sillah and Twenty Six (26) others have been approved in the House of Parliament at OAU Drive, Tower Hill in Freetown on Thursday 24th May 2018.

Sadiq Sillah was one time Chairman of Pujehun District Council since 2008 to 2018 under the ruling Sierra Leone Peoples Party (SLPP).

President Bio’s moves to ensure public officials go for work on time and stay at their work places for effective service delivery has been welcomed by citizens in every nook and cranny of the country. Kudos Mr. President.