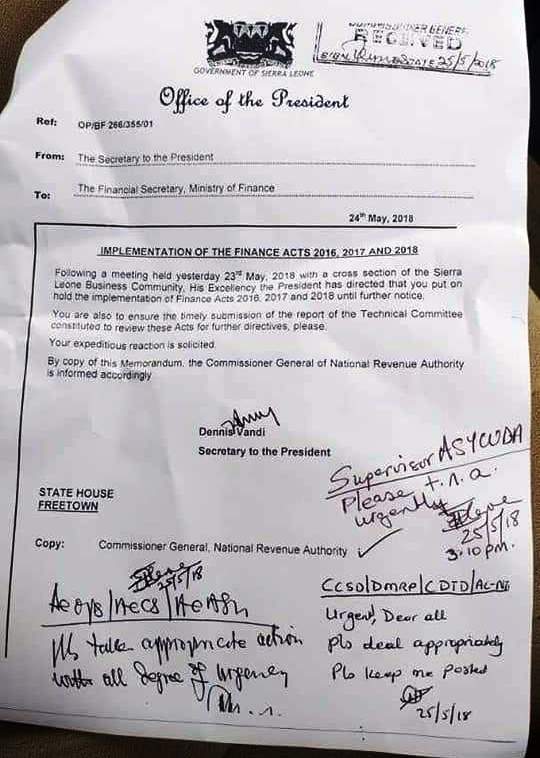 State House Press Secretary, Yusuf Keketoma Sandi, has accused the Secretary to the President Dennis Vandi of causing huge embarrassment to the President of the Republic by issuing a directive for the suspension of the 2016, 2017 and 2018 Finance Acts.

“This is a gross embarrassment from the Secretary; the President takes it very seriously and has warned that it should not be repeated,” Keketoma said.

According to a leaked Memo from the office of the President addressed to the Financial Secretary, Ministry of Finance dated 24th May 2018, President Julius Maada Bio directed the 2016, 2017 and 2018 Finance Acts were to be suspended until further notice.

The directive, according to the Memo, was given following President Bio’s meeting with the Sierra Leone Business Community.

Keketoma said the President never gave such an order and that the public should consider it null and void.

“This was a unilateral decision by the Secretary to the President; he did not discuss it with his Boss nor the Chief Minister before doing the letter and there was no legal advice from the office of the Attorney General,” he added.

In 2017, after serious pressure from the Business Community, former President Ernest Bai Koroma, before giving assent to the controversial Finance Act, returned it to the House of Parliament with some recommendations before it was enacted.

Meanwhile, Dennis Vandi has apologized to the public in a press release dated 28th May 2018 for what he referred to as an error.

“I erred in that Memorandum by ascribing to His Excellency the President that he made such a direction,” Vandi stated. “The President did not give such a direction knowing that section 110[1} of Act No. 6 of 1991 clearly states: ‘no taxation shall be imposed or altered otherwise than by or under the authority of an Act of Parliament’.”

Whilst noting that all relevant laws relating to revenue collection remains valid until amended by an Act of Parliament, Vandi went on to apologise to the Business Community and the general public for any inconvenience his action might have caused.

“During the meeting, His Excellency the President expressed serious concern about the impact of any taxation on ordinary people and therefore only suspended discussions on the matter pending further consultation with the Ministry of Finance and Development Partners,” Vandi stated in the release.

Executive Director of Centre for Accountability and the Rule of Law (CARL), Ibrahim Tommy, said he thinks the directive was a grave mistake because suspending the enforcement of a tax code by the Executive Arm of government not only usurps the powers of Parliament, but it also deprives the state of the much needed resources and notes that it is refreshing that the mistake has been acknowledged and the “unlawful” directive has been reversed.

“I hope that we don’t get to see similar mistakes in the future; statements bordering on the law should be thoroughly cleared by the Attorney General before they’re published,” Tommy ended.

In August 2008, the Secretary to the President James Sanpha Koroma resigned his position following controversies surrounding a proposed salary and retirement benefit increment for the President and Vice President, an instrument that was taken to the House of Parliament.

Sanpha also accepted responsibility, saying that the proposal never had the approval of President Koroma. In fact, he stressed that President Koroma was neither consulted nor informed of the existence of the instrument and therefore could not have approved.

At the time, people believed that Sanpha took the bullet for the President and his Government.

Similarly, there are calls from some sections of the public for Dennis Vandi to do likewise and resign.

However, Ibrahim Tommy thinks instead of calling for his resignation citizens should applaud the decision to review the statement and admit mistakes that were made whether genuinely or otherwise.

“Resignation is a personal decision. If he feels so strongly about his mistake, he may resign but there is certainly no other punishment I know of for such mistakes other than resignational or a dismissal,” Tommy said.

To this Keketoma Sandi said, “It is the prerogative of the President to hire and fire, and if such decision is taken I will get you informed.” Secretary to the President Sacked...