Over Visit To The Mayor Citizens Applaud SLPP’s Scribe 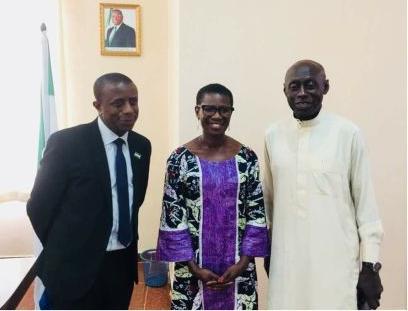 Over Visit To The Mayor Citizens Applaud SLPP’s Scribe

Citizens across the country, especially Freetonians, have applauded the combined visit of the ruling Sierra Leone Peoples Party (SLPP) Secretary General, Umar Napoleon Koroma and the Minister of Political and Public Affairs, Foday Yumkella, to the Mayor of the Freetown Municipality, Madam Yvonne Aki-Sawyerr, on the aftermath of the physical and verbal attack on her person by alleged supporters of the ruling SLPP.

It could be recalled on Wednesday, 23rd May, 2018, a group of hooligans, allegedly supporters of the ruling Sierra Leone Peoples Party (SLPP), physically and verbally attacked the mayor of Freetown, Madam Yvonne Aki- Sawyerr, during discharge of her constitutionally mandated duties; an attack that has been condemned by Sierra Leoneans from all works of life.

Many civil society organizations, members of the main opposition All Peoples Congress (APC), a handful of independent media houses and private Sierra Leoneans have through various press releases condemned this ugly act as it has the potential to disrupt the peace and security of the state especially when the victim of the attack is from the opposition party.

Though, the government has not come out with any condemnation statement but the ruling SLPP through its scribe condemned the act by way of a press release a day after the attack. This was also followed by the visit of the very Secretary General, Umaru Napoleon Koroma and the country’s minister of Political and Public Affairs, Foday Yumkellah.

Many Sierra Leoneans say the visit was timely and may serve as a confidence booster to the Mayor especially during these turbulent times for her and therefore commend the action of the SLPP duo.

Paopa Government, More Of A Talker...