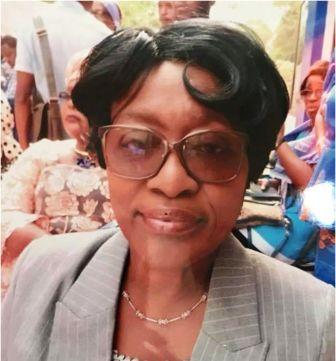 The Administrator and Registrar General, Haja Mariama Seray Kallay has said that she wants Lawyer Yasmin Jusu-Sheriff to either take her to Court or to the Anti- Corruption Commission (ACC) when reporters from Sierra Express Media went to her office at Walpole Street in Freetown on Thursday, 24th. May, 2018, to get her response to allegations that she has to pay the sum of Le21,177,032.23 each to the estates of the late Mr. David Peilu Aitkins and Madam Victoria Shonubi, bringing it to a total of Le42,354,054.46.

The money in question is the proceeds from the sales of two properties of the late Joseph F. Garber at 140 and 140A Kissy Road in Freetown sometime in 2010 to 2011.

In a previous interview with this newspaper, Haja Mariama Seray Kallay acknowledged that that she is aware of the sales of the properties in question at 140 and 140A Kissy Road in Freetown. She also said that she has not converted the said money to her personal use and benefit. She also revealed that she was aware that she had paid three of the beneficiaries, namely, Messrs. Randolph Aitkins, Sylvanus Aitkins and Christian Cole. She also stated that she was aware that there was still some money from this transaction in the bank. She also promised that she will revisit the file of the late Joseph F. Garber and that if there were still beneficiaries to be paid she will make sure that they receive their money without any delay.