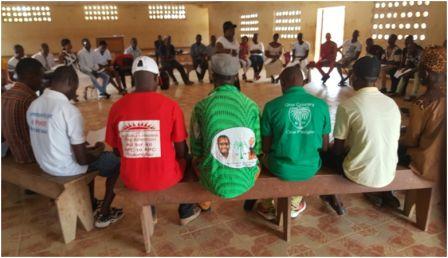 The session aimed at building community relationship, foster mutual cooperation and promotes peaceful coexistent among members of the various political parties present after the electioneering process through forgiveness, appreciation and gratitude approach, a module designed by Lemonaid Fund and cascaded by SWSL.

According to reports from the Western Rural District, Lumpa community was one of the areas where violent was prevalent even before, during and after the electioneering process.

The session which attracted large turnout of participants, discussed the need for community members to practice healthy lifestyle and stable happiness with the motive of promoting individuals and community wellbeing.

Representing the APC, Ibrahim Sesay of Lumpa community commended the session and recommended that similar events to be organize for community stakeholders and emphasized on the vulnerability of the community. He emphasized on how youths are traumatized as a result of lack of basic opportunities and spoke on the manner in which the gathering was positively impacted their lives.

In the same vain, the SLPP Chairman, Amadu Sesay in a cheerful mood said the session was not only important but also pivotal as far as peace and unity concerned adding that the session taught them how to live as one people in one country.

Representative of the ADP, Abdulrahman Sannoh who contested for councillorship but lost to his opponent said he was happy for the program because he it was the first meeting since election but expressed disappointment on the manner in which he has been abandoned by authorities in the party after the election.

In a special note, Koroma applauded LemonAid Fund for supporting their mission.

SWSL is an organization that stands firm in promoting social work activities in the country since its inception despite the under-value of the profession in Sierra Leone.