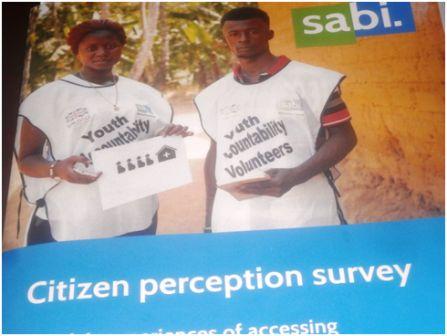 After a year of research involving 594 communities, 80 wards and 40 chiefdoms from all 14 districts in Sierra Leone Strengthening Accountability, Building Inclusion (SABI) has on May 24th 2018 launched the Citizen Perception Survey at the British Council Hall in Freetown.

Of those surveyed by SABI, 42% said they had visited a primary healthcare unit (PHU) in the past 12 months and 58% said they had not. Bo has had most correspondent (52%) who answered yes and Western Urban Area the most 87% who said no.

From the data collected 84% of respondents said the PHU had the drug to treat them, 13% said the PHU did not and 35 didn’t know. Western Urban Area (94%) had the highest percentage of respondents who said drugs were available and Pujehun (22%) had most who said they weren’t. Meanwhile, 76% said the PHU had the right equipment to treat them when they visited, 10% said it did not and 14% didn’t know. The Ebola survivor group had the most respondents (83%) who said the correct equipment was available and people with disabilities the fewest (13%). In total, 78% of people thought PHU staff were trained and qualified, 3% disagreed and 19% didn’t know.

SABI is a four citizens led accountability programme funded by UK aid and being delivered by a consortium of international and Sierra Leonean partners, led by international development agency Christian Aid.

Working in every district of the country, the program seeks to strengthen community led accountability, increasing awareness of and demand for the delivery of basic services including health, education and social protection.