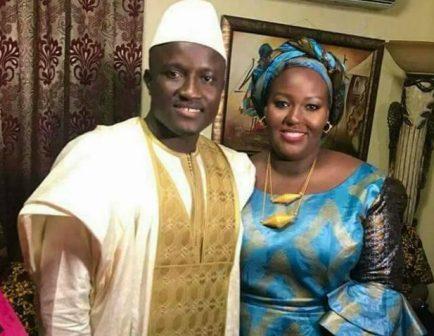 Rogues whose identities are as yet not fully confirmed but who had alleged they were State House officials, armed with guns but no Search Warrant, tonight of 14th April 2018, unlawfully invaded residence of a Lawyer, Ibrahim Mansaray Esq. and his wife who is also a lawyer, Mrs. Alice Mansaray (nee Koroma). The wife Alice, is eldest daughter of former President of Sierra Leone, Dr. Ernest Bai Koroma.

According to information from various sources, the persons who forcefully entered the Mansaray Family’s private residence with guns, included a uniformed military officer who threatened to shoot and kill Ibrahim, the husband, for inquiring if they had a Search Warrant. When the wife Alice came outside and pointed out that by law, without a Search Warrant, no-one should enter a private compound, the uniformed soldier reportedly loudly promised to give her such a serious slap that she will definitely faint on receiving the slap.

Neighbours who heard the commotion tell this media that they heard the armed men loudly saying they were sent by State House to seize the jeep Mrs. Alice Mansaray drives as the vehicle supposedly belongs to the State. We have however learnt that the jeep in question is a private one that she has been using for some 10 years now and was privately purchased when she returned home to practise Law.

When contacted by Awareness Times, both Alice and Ibrahim sounded very shaken after the incident but Ibrahim managed to speak and confirm the above details. He also confirmed that they have since received apologies from Hon. Rado Yoki, the Head of President Maada Bio’s Special Task Force on Government Vehicles.

When this writer contacted Hon. Rado Yoki, he confirmed the incident but said whosoever were those persons were not sent by him nor were they acting on his orders. He said he did not even know who they were. He explained that upon receiving the complaint, he speedily contacted Lawyer Mansaray by phone and fortunately the military officer and other personnel were still inside the compound trying to now drive off with the jeep. Hon. Rado Yoki said he asked Lawyer Mansaray to hand the phone to the intruders and then through the telephone, he ordered them to release the jeep as they had no authority to collect any vehicle from the daughter of the former President let alone in this dark night.

Continuing, Hon. Yoki says he had felt that Lawyer Mansaray will then ensure the unauthorized persons were intercepted and handed over to the Police but that Lawyer Mansaray instead allowed them to leave the compound without stopping them. When asked why did he himself not order the military personnel to wait there for further police investigations since the officer had indeed obeyed his directives for them to relinquish the vehicle initially seized, Hon. Rado Yoki explained that he had thought Lawyer Mansaray will now detain them.

However, Lawyer Mansaray tells Awareness Times that it would have been very foolhardy for him or his wife to try to intercept the armed men who had already told him they will shoot him and slap his wife.

Alice, a British citizen who was born in England, took a decision to return home after her Law studies in England so as to contribute to Nation building. She is a very quiet person but known to be a kind philanthropist engaged in many helpful causes.

Her husband Ibrahim Mansaray, first broke the news when he sent out the following distress message to his friends tonight:

Alice and I are victims! Wow! Wow! The talk about vigilantes attacking and harassing people is true. I didn’t believe it when I first heard it. My wife and I witnessed and suffered from it just now. An armed military officer and a civilian entered into our premises 7:30 pm without any search warrant or any lawful authority. They alleged that State House instructed them to barge into our premises. The military officer threatened to shoot me when I attempted to stop them. I’m so shocked. Just can’t express myself right now. Ibrahim.

The spate of vigilante exercises has been causing great concern in the country. It is appearing the vigilantes seem to have no limit to their targeted victims. Earlier in the week, in a very topical bizarre development, a senior judge of Appeals Court along with his young children and his wife, were all ordered off his official vehicle as he drove home from the Law Courts. Many senior public servants have also suffered from the same molestation at the hands of pro-SLPP government vigilantes under the guise of tracking and locating “missing” government vehicles. However, Hon. Rado Yoki says the State House Task Force on Government Vehicles, have not asked any vigilante groups to be harrassing others in the name of searching for government vehicles. He says the Government has strongly condemned such unlawful vigilante actions.

Without mincing his words, Hon. Yoki sternly said he wants the public to know that anyone purporting to be sent by State House to look for government vehicles, should be accosted and the Police speedily called in to investigate. He repeatedly expressed regret for the inconvenience being suffered by citizens at the hands of these as-yet-unknown vigilantes.

As we were about to publish this news dispatch, Lawyer Ibrahim Mansaray contacted us to inform us that amongst those who forced into his private residence today were, in his words: *”The military personnel is identified as Lance Corporal 18181582 Taylor L. and the civilian is Daniel Moiba who claimed to be one of President Bio’s personal bodyguards”.* This information from Lawyer Mansaray has now been sent to Hon. Rado Yoki for further investigation by State House as promised.