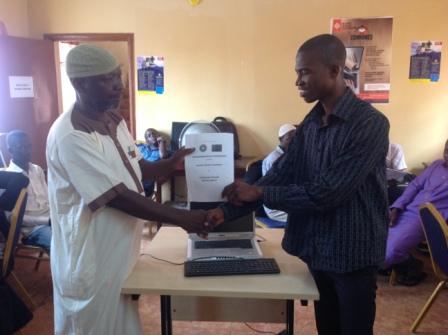 In the presence of students and staff members of Islamic Online University, Sierra Leone Campus (IOU/SL) and FBC Muslim Students Jamaah (FBC/MJ) on Wednesday March 28, the signing of Memorandum of Agreement (MOA) between the two was effected.

Speaking on behalf the chancellor and founder of IOU, Sheikh Alie Kallay, the Country Representative of IOU in his statement during the signing ceremony told the students that they serve as ambassadors of IOU not only to the Muslim Students @ the FBC, but to the non Muslim students as  well so that they may know what Islam is all about.

The two Students Ibrahim Abdul Latheef Kamara and Alusine Jalloh of the engineering Department who represented and signed on behalf of the other members of FBC/MJ welcomed the Idea and promised to take advantage of IOU’s 1 Million Scholarship project.

For the time being Alusine Jalloh has been appointed as the coordinator for IOU at the FBC campus for this academic year!

Mean while as the nation is going to the polls this Saturday to elect new government the founder and chancellor of IOU professor Dr Bilal Philips prays for Sierra Leone and appeals to all parties to promote peace and avoid any form of violence before, during and after the elections.

One of examples of the flexibility and adaptability of the Islamic Online University you can be a student or employee elsewhere and you still remain as IOU student regardless of your various engagements.

IOU is tuition free, completely online, English Medium and it method fits and suits every one. It was established in 2007 and its student body has reached 435,000 from 250 countries worldwide. In its Vision 2020 project, IOU sets to dish out One Million Scholarships for countries that have left behind in terms of tertiary education.