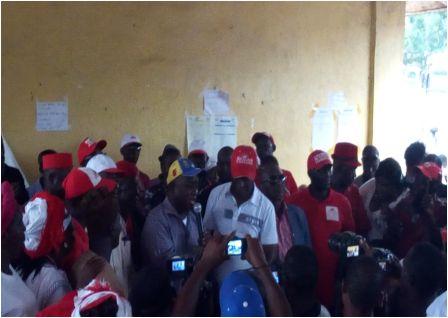 John Bangura, Regional Chairman for the National Grand Coalition (NGC) Party in the north who also doubles as campaign manager is currently championing massive support for Dr. Samura Kamara in the south and north of the country ahead of the March 27 presidential elections run-off. The name John Bangura is a household name in the northern part of Sierra Leone and founder and head of the nongovernmental organization, Hope Sierra Leone, which has provided lots of livelihood support for rural communities. (Photo: John Bangura announcing his decision to support Dr. Samura Kamara )

Bangura informed a meeting at the Yoni Bana Court Barray on Wednesday that he has mobilized thousands of NGC and SLPP supporters to cast their votes for development in the coming elections, and added that Dr. Samura Kamara is the preferred choice that the country should rely on for its leadership. “I went away for a while but now I am back with a team of supporters for the APC,” he said noting further that he has mobilized support from Tonkolili, Moyamba, Kono, Bombali, Port Loko and very soon he will be at Bumbuna and other areas to get more voters for Dr. Samura Kamara.

The APC Presidential Candidate was given the opportunity to launch an operation code name ‘operation gbl gbe’, meaning ‘operation sweep all’. Dr. Samura Kamara provided the sum of Le10million to facilitate the mobilization of more support.

Mr. Bangura assured that he is more than willing to do all he can to let the APC stay in power and continue with its development.

The decision of Bangura with his team came at the right time when the NGC has stated clearly that it will remain neutral during the run-off polls.

A press released from the party issued out on Wednesday states “Despite our grave misgivings about the electoral process thus far that has resulted in a planned presidential run-off between SLPP and APC on March 27, 2018, and current legal challenges to the electoral process, the party embarked on widespread consultations with its members across the country with a view to taking a position on the runoff. The message from the overwhelming majority of NGC members and supporters is clear: NGC should not endorse either APC or SLPP or enter into a coalition arrangement with either party. Rather, the NGC should concentrate on providing an effective opposition on behalf of the people of Sierra Leone. The leadership of the NGC endorses this position.”

Welcoming Mr. Bangura with his team to the APC, Dr. Samura Kamara said they have made the right decision to support development. He described the NGC as a party with good intentions and love for the people, but only that Sierra Leoneans are not ready to accept it as at now.

The APC Presidential front man who successfully held his campaign tour in villages like Mathoir, Yoni Bana, Petifu Fullasama, Rochen and Mile 91 Town in the Tonkolili District, was received with open hands by APC supporters who came out with their local musical instruments, singing and dancing in support of Dr. Samura Kamara.

Meanwhile, eight political parties have so far declared their support for Dr. Samura Kamara ahead of the run-off elections as on Thursday. They are: NPD, NURP, PLP, RENIP, RUFP, UDM, CDP and ADP.