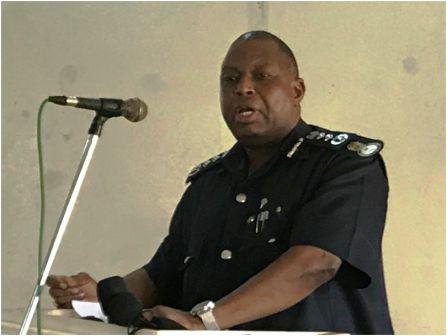 One of the damning accusations against President Ernest Bai Koroma was/is his insatiable desire to continue as President of Sierra Leone. He kept a sealed lips for months and after intense pressure from the media, Civil Society Organisations,  opposition parties  and some members of the public, the ruling All People’s Congress (APC) led Government came out to deny that President Koroma has no intention to run for another term.

With ignited unfolding events like the illegal sacking of the constitutionally elected Vice President-Alhaji Sam Sumana, many were convinced that President Koroma was adamant to have “a more term” contrary to Sierra Leone Constitution. Indeed Sam Sumana charged that he was illegally sacked because he kicked against President Koroma’s third term bid.

Even though many people are saying that President Koroma was forced by the National Election Watch, the media and some opposition parties to announce the date for the multitier elections, he did so outside Act No. 6 of the 1991 Constitution. In continuation of the more time bid, he added at least a week on his five years tenure. Principally, his tenure had expired and therefore now a “caretaker President.” Because the Sierra Leone Constitution do not allow vacuum, President Koroma enjoys this privilege as our revered President until the smooth transition is effected.

Truth be told, it appears as if President Koroma is an unhappy man. He is not happy because Sierra Leoneans have resisted and are still resisting all plans that would have entrenched him in power. President Koroma has reportedly fought tooth and nail but he is still not getting a smooth ride in overstaying his welcome.

The Sierra Leone Constitution bestowed enormous powers on President Koroma. Subject to the provisions of Section 53(1), the executive power in Sierra Leone shall be vested in the President; He is the Commander in Chief of the Armed Forces; He is the Fountain of Honour and Chairman of the National Security Coordination Committee etc etc. So it will not be surprising if the Sierra Leone Police are acting like a Mexican drug gang to throw fear in the spine of political opponents and innocent Sierra Leoneans like staff of the National Electoral Commission.

Some of the police officers who prefer anonymity are claiming that their job is at stake and are finding it difficult to resist the unprofessional directives from above. Why power from above at this crucial moment? If President Koroma takes credit for all good work in the country, he should be ready to face any human rights violation by the Sierra Leone Police. May be President Koroma will say his “unconstitutionally handpicked” Vice President-Victor Bockarie Foh (Reference to the ECOWAS Court Ruling) will be held responsible because he is the Chairman of the Police Council.

If not orders from above to intimidate political opponents, it will be an instruction/s from the APC remotely controlled Independent Media Commission to mute the media. Is President Koroma angry so much that he cannot come out with a press release to denounce or put a stop to the increasing hate speeches and tribal slants? The crack of a divided Sierra Leone is now visible which has the propensity to reverse all the gains we have made as a country.

Is President Koroma blind to the truth to know that the Hutu and Tutsi divide led to the loss of many lives in Rwanda? Mr. President, you were not the first and will never be the last person to leave power in Sierra Leone after expiration of your mandates. Since you are still in control it is good to act now for your legacies should be protected and worth remembering.

The unprofessional behaviours of the Sierra Leone Police, if goes unchecked, according to the former Sierra Leone Bar Association President (Lawyer Jenkins Johnston of blessed memory) will head this country into a despotic rule. In an exclusive interview, Lawyer Jenkins Johnston said if the police can be used to break up a peaceful meeting of lawyers, then we are surely heading for despotism and tyranny which are totally unacceptable in a modern democratic state.

He further described the unprofessional behaviours of the Sierra Leone Police (SLP) hierarchy as “irresponsible policing.”

Following the official commencement of peace in Sierra Leone in January 2002, billons of Leones were poured into the training of the Sierra Leone Police in order to transform it to a professional force. Take it or you leave it, the politicization of the SLP has undermined professionalism which amounts to the wastage of tax payers’ money.

The horror stories of police brutality recorded in all areas of the country are appalling and very intimidating with no end in sight. The unprofessional behavior ranges from unlawful arrest, bribery to heinous murder. The frightening part of the horror story is that the Inspector General of Police (IGP), Dr. Richard Moigbeh seems not to be in control of his personnel. The supervisory authority-the Police Council, does not seem to have a clue either, as it has neither taken the expected measures to sanitize the institution so that the public will continue to repose confidence in the SLP. The police leadership must resist being remotely used by the ruling Government as the sole aim of all politicians is to maximize their political gains.

This brings the problem center stage and squarely on the doorsteps of the Fountain of Justice and Honour, His Excellency Ernest Bai Koroma. What has he done in the face of all the multiplicity of senseless destruction of life right underneath his nose?

This nonchalance on the part of the ‘Powers that Be’ seems to have emboldened the lawless and wayward OSDs who irresponsibly killed an innocent civilian in the person of an okada rider (commercial motorcycle in 2012) in Bo during a “Thank You Tour” of the Sierra Leone People’s Party (SLPP) Presidential candidate, Rtd. Brig Gen. Julius Maada Bio.

Should it then surprise anyone that some people behave as brutish beasts in Sierra Leone? The Voiceless’ lens view is that the moral and political will is not there to curb lawlessness. The rampant killings by the OSD personnel seemed justifiable. This was why it took place in Bumbuna, where our trigger happy OSD officers mowed down a restaurant worker during an industrial strike. The young lady was an innocent by stander.

As if human beings were used as a sacrificial lamb, the killing by the SLP jumped over to Freetown, Sierra Leone’s capital. Two youth were killed-Wellington-East end and Earl Street-Central part of Freetown. Outraged by the senseless killings, some angry youth carted the dead body in an attempt to take it to State House. Apart from the US Marine officer that was brutally killed, an innocent okada rider around Adonkia village was shot dead because he forced his way through a police check point.

Ahead of next week’s run off slated for 2th March 2018; the police are bent on intimidating NEC officials to satisfy their political god fathers who are bent on undermining the electoral process. This move will be resisted and Sierra Leoneans will not allow the police to incite any violence.

“In recent days, however, the Sierra Leone Police has unwarrantedly entered NEC premises, unannounced and at random, interrogated NEC staff and obstructed them from performing their duties,” said the Chief Electoral Commissioner-N’fa Alie Conteh in a press statement.

NEC says the harassment from police personnel has not only delayed the sensitive work of the commission ahead of the run-off slated for the 27th March 2018, but the “unsystematic and confrontational nature of these visits” has scared away and intimidated some of their staff.

It is at variance with good governance that the very heart of state security is behaving like a Mexican drug gang with almost total immunity. The President should take charge now and speak. This is the Pen of The Voiceless Sierra Leoneans.