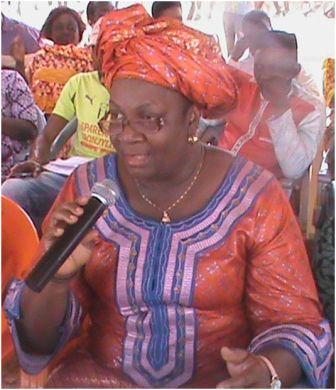 Addressing the launching ceremony, Madam Madina Rahman reiterated that the introduction of the vaccine represents another major milestone of the Ministry of Health and Sanitation and will significantly contribute to the reduction of preventable child deaths and disability.

She informed her audience that immunization is a high impact and cost effective intervention in protecting and saving lives, giving full opportunities to individuals to develop their potentials thus leading to sustainable socio-economic growth and the attainment of Goal 3 of the Sustainable Development Goals. She said vaccines and vaccinations reduce infant and under five deaths and disability caused by vaccine preventable diseases and save the costs involved in the management of these diseases.

Madam Rahman disclosed that Yellow Fever vaccine was first introduce in 1975 as a nationwide response campaign against an established outbreak at the time, citing the introduction of the Pentavalent Vaccine in 2007, Pneumococcal vaccine in 2011 and Rota Virus vaccine in 2014. She added that currently the Expanded Programme on Immunization (EPI) has eight vaccines targeting twelve childhood killer diseases.

She reminded all that the introduction of the new IPV will help to further protect child against the debilitating and sometimes fatal polio virus infection, adding that it will protects children against all polioviruses types and will help prevent the re-emergence or re-introduction of wild polio and any other polio viruses. She said the vaccine will be administered to children at 14 weeks of age on the right thigh that is the vaccine will be given at the same time to children who receive their third Pentavalent, third Pneumococcal and third Oral Polio Vaccines.

The Deputy Minister stated that in 1988, there were 350, 000 reported cases of polio in 125 endemic countries, saying that as a result of the alarming statistics, WHO through its member countries resolved to eradicate polio disease through the  provision of potent vaccines to all children. She said the intervention hugely paid off as figures dropped from 350,000 in 125 endemic countries in 1988 to only 22 wild polio cases reported in 3 endemic countries, including Afghanistan, Nigeria and Pakistan as at December 2017.

She told the gathering that for Sierra Leone, in the 29 years between 1988 and 2017, they have made significant gains in the effort to eradicate polio from the country, stating that the last two indigenous polio cases were reported in 1999 in two districts, one in Kenema and one in Port Loko districts. She said in recognition of the gains made as a country, Sierra Leone was granted a Provisional Polio-free Certificate Status in 2007 by the African Regional Certification Committee.

Madam Rahman urged all to work assiduously with the Ministry of Health and development partners in a well-coordinated effort to make quality health care accessible to every individual in every part of the nation thereby helping to rewrite the health history of the nation. She reiterated the goodwill of the government and extended sincere thanks to all partners including WHO, UNICEF, CDC, NGO and CSO partners for their support.

Speaking on behalf of the UN Country Team, WHO Officer in Charge, Alexander Chimbaru said 30 years ago, when the Global Polio Eradication Initiative was launched, polio paralyzed 10 children for life every 15 minutes, in over 130 countries of the world.

He said the IPV alongside the oral vaccine will provide children with the best possible protection against all polio diseases, as it is free, safe, used in countries around the world, and is now finally available in Sierra Leone.

Mr. Alexander Chimbaru appealed to all parents and guardians of children below one year of age to take their children to the health centres to receive all their childhood vaccines, and ensure that they are protected against polio and other debilitating and life-threatening diseases that can be prevented by vaccine.

He pledged the UN Family continued support to the government of Sierra Leone in all efforts aimed at sustaining polio-free status, until global polio free certification goal is attained.

GAVI Regional Head, Anglophone Africa, Dr. Maryse Dugue said the GAVI has been in place for 25 years and hope to complete this initiative by ensuring Sierra Leone is polio free.

She recalled the Ebola outbreak in which the International Community and GAVI supported Sierra Leone with drugs and an Ebola vaccine and also mobilize resources to bring the polio vaccine.

Dr. Dugue informed her audience that GAVI have supported the country with the introduction of Pneumococcal, Rota Virus, Pentavalent, Measles second dose vaccines and more to come but needed relentless efforts and urged them to remember that in no way if they stop giving the vaccine,  the disease will come back.

She congratulated the Ministry of Health and Sanitation and partners for the dedication and good work for making this event happen and reiterated GAVI’s support to ensure that the country is free from polio.

The Deputy Chief Medical Officer II and Chairman for the ceremony, Dr. Amara Jambai underscored the importance of the vaccine, adding that it will assist the oral polio vaccine to kill the virus that escape from the stomach to the blood cell.

Highlight of the launching include overview of the vaccine by the Programme Manager, Expanded Programme on Immunization and Child Health (EPI/CH), Dr. Dennis Marke, a skit performance by Vamboi and team and the administering of the Inactivated Polio Vaccine (IPV) formed high point of the launching.

Each chiefdom to have an ambulance...