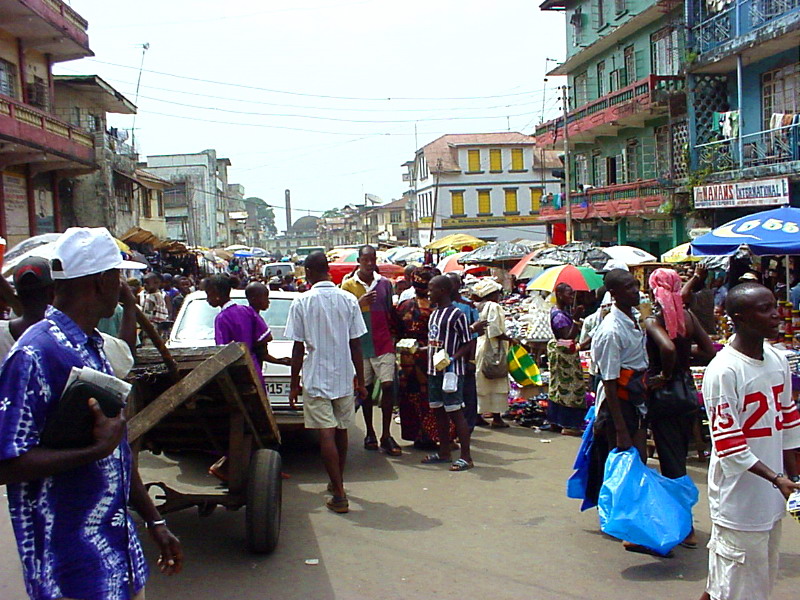 Welcoming the entourage at the Aberdeen Road Market were they first visited, Councilor Yeanoh Sesay stated that the presence of the distinguished guests brought relief and blessing in to the market because she said, it was the first time for such caliber people to visit them in their business place and declared the market as a ‘Tolongbo ground’.

The Chairlady for the same market, Mabinty Samura excited the crowd with one the APC’S traditional campaign songs and expressed thankfulness to colleague business women for their attendant and assured that Tolongbo would not waste any time to win the March 7th 2018 national elections.

Addressing market women in various market centres, Madam Elizabeth Mans who is the Minister of Fisheries and Marine Resources emphasized on the importance of market women to the country as a whole.

She discussed that in 2007; President Koroma won the elections against Solomon Berewa and defeated Julius Maada Bio in 2012 in the first round through the unflinching support of the market women adding that President Koroma said because he loves freedom for his people, he would not add a single day when his term of office would have expired.

In that regard, the women’s congress President said, President Koroma decided to leave with us one of the most honest politicians with visionary leadership, Dr. Samura Mathew Wilson Kamara to continue where he stops.

Giving a brief background of Dr. Samura Kamara, Elizabeth Mans pointed out that he served the civil service to the rank of a Financial Secretary adding that he had worked excellently at the World Bank and the International Monetary Fund (IMF).

She said Dr. Samura Kamara whom she described as the architect of the Agenda for Change and Prosperity has served as a Governor of the Bank of Sierra Leone, Minister of Finance, Minister of Foreign Affairs and contested for the African Development Bank Presidency.

Madam Mans discussed that President Koroma also appointed Honorable Chernor Maju Bah (Chericoco) to assist Dr. Samura Kamara adding that Chericoco who claimed the rank of a Deputy Speaker in the House of Parliament is elevated to the position of a Vice President to be because he proved positive when he was serving as a Member of Parliament in Constituency 110 which has been transformed to Constituency 126.

She went on to state that the APC believes in Dr. Samura Kamara for the fact that he has a good track record as a philanthropist that cares for the young and aged devoid of tribal or regional barrier.

Speaking to thousands of supporters in various market places, wife of Dr. Samura Kamara, Mrs. Betty Samura Kamara encouraged market women to stand firm and ensure the APC win the power adding that the women of Sierra Leone should make it happen because the power belongs to them.

She admonished first time voters to vote wisely for her husband because she said; the country’s development lies in their hands and advised young people to totally stay off from any violent activity but to complain to the appropriate authorities.

The wife of the APC running mate, Madam Hawa Bah thanked market women for taking the APC business as their work adding that their presence in to the different business centres demonstrated that they have traders at heart because market places are dominated by women who she described as most vulnerable in society.

“As a grassroots woman I understand women’s problem”, said Madam Bah and cautioned them to not allow deceitful politicians who have made no contribution to the development of the country to full them and stressed that the national development can only continue if they vote for the APC again.

The Chairlady for Congo Market, Chief Ya Alimamy Fofanah said only the APC can remove them as women from suffering and called on first time voters to steady their mind by not allowing selfish politicians to distract their minds while the Kroo Town Road Market Chairlady, Madam Hajara described the APC as a grateful party that cares for the grassroots and assured members of the entourage that Kroo Town Road market is an APC dominated area.

The Parliamentary candidate for Constituency 131, Osman Jalloh outlined that the APC constructed the Aberdeen Bridge, community centre, the market, roads and many other structures within the Aberdeen axis and expressed thankfulness to the Leader and Chairman of the party, President Koroma for demonstrating  astute leadership for consecutive ten uninterrupted years.

Yumkella has nothing to tell colle...