Homepages
Your trusted place for Sierra Leone and global news
Trending News
HomeLife and EntertainmentSierra Leone should be the ultimate winner!

Sierra Leone should be the ultimate winner! 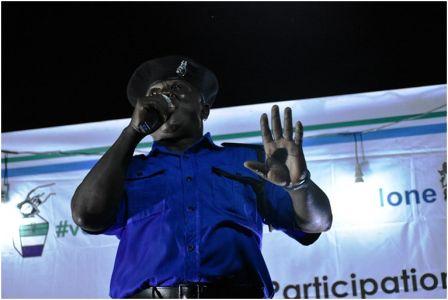 Sierra Leone should be the ultimate winner!

Using the edutainment approach, the musicians from Artist for Peace Sierra Leone and Sugar Merecin Entertainment Group get communities to understand the essence of non-violence elections, the critical role their votes could play during and after the elections and urging women and youth to participate positively in the electoral process.

“Our message is simply vote Sierra Leone,” said Wahid, spokesperson for the Artist for Peace Sierra Leone. “We make people understand why their support and votes should not be based on tribe, region, political affiliation or any other selfish consideration but on issues. Sometimes the best leader will not come from your party or tribe or region, so vote right.”

The main messages are reverberated in their songs with the hashtag #votesalone and #VoteNvoteright, urging women to assert their importance beyond the usual ‘ashobi-dance’ culture and calling on the youth to value their votes instead of trading them for alcohol and drugs. The overall object is to achieve free, fair and credible elections.

This is Sierra Leone’s fourth democratic elections since 1996 and the stakes are high without an incumbent President running. Women account for about 52% of the country’s 7 million population but there only two females out of 16 candidates running for the presidency. Similarly, youth form the bulk of the population but the majority are unskilled and unemployed and often play into the hands of unscrupulous politicians. There have been reports of violent clashes between rival youth of the two traditional political parties- the incumbent All People’s Congress and the opposition Sierra Leone People’s Party.

“These (women and youth) are the people we are mainly targeting with our songs,” said Emerson Bockarie, CEO of Sugar Entertainment. “These are the people who mainly decides the next Government, so they need to be properly informed and sensitized to make that huge decision. And that is exactly what we are trying to do under this project.”

The project, Promoting civic participation in democratization processes through entertainment, aims to promote civic responsibility by encouraging voter registration and voting, and further engender a keen awareness of governance processes within the youth population. Funded by OSIWA through Actionaid Sierra Leone in collaboration with Reel2Real Productions, the project built partnerships with radio and television stations to provide coverage and recorded coverage, as the case may be. To gain free entrance to the music concerts, participants were encouraged to show proof of voter registration, thus ensuring that eligible voters, particularly young people and women, register for the 2018 elections and informed by each major stakeholder of the electoral process (Electoral Monitoring Bodies, Security Forces, etc.) on the Dos, Don’ts and the How of the electoral process.

Realizing that elections are a democratic process and the right of every citizen, this unique project was extended to those marginalized districts and potential flashpoints requiring structured civic engagement. From Bo, Bombali, Kenema, Port Loko, Kailahun, Kambia to Kono, Moyamba and Koinadugu and Western Area with a grand finale scheduled to hold in Freetown on 24th February 2018.

“At the end of the day the ultimate winner should be Sierra Leone,” said Wahid.