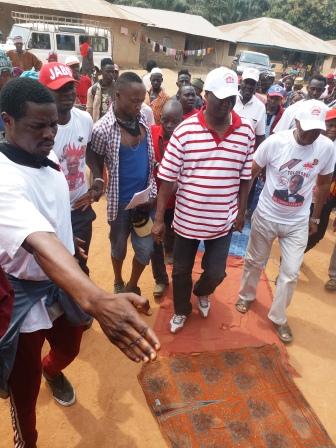 No Hope For Opposition Parties In Koinadugu

The Court Barry at Yagala, five miles from Kabala town in the Koinadugu district was full to the brim in the early morning hours of Thursday 28th January 2018, as highly-spirited locals turned out in hundreds to set eyes and attentively listen to their son and brother, Momoh Konte, nicknamed the APC Bulldozer. True to alias name, the bulldozer graded the rather rough and lopsided political terrain created by the defected NGC light weight, Peter Bayoku, alias Agangba Jas in his strongest home village of Yagala. Not able to resist their joyful the people, young and old busted out singing, clapping and dancing as the Political Bulldozer strayed removing the rocks and smoothening the rough road that has held back their economic and social well-being.

Without much ado Momoh Konte readily granted the several requests made to him by the predominantly Limba community ranging from the provision of rice mill to relieve to old women from the back-breading old method of cleaning husk rice, off-set the financial burden of community teachers who are yet to be approved by Government and paid fess for the less privileged school going children.

As if that is not enough, the political strategist assured his people that actual bulldozers were on their way to grade the road, which will facilitate the movement of people and enhance trading of agricultural produce in Koinadugu and beyond.

Finally, he said, ‘’ I will use my office as Chairman of NATCOM to connect you to Telecommunications services’’, a message that was received with thunderous applause.

As Chairman of APC in Koinadugu district, he appealed to all the tribes in the district to unite and return the APC back in governance and move on with the unprecedented development of the country as a whole. He particularly admonished the Limba people that they have the most to lose if they allow themselves to be swayed away by shallow and selfish politicians.

At the AYV Mayoral Debate, Yvonne...