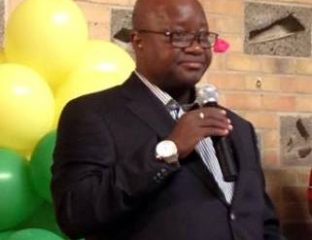 The Government of Sierra Leone under the leadership of His Excellency, Dr. Ernest Bai Koroma has over the years been mobilizing financial resources to finance water projects in the rural areas of the country from budgetary allocations and grants from its traditional development partners such as World Bank and African Development Bank (AFDB).

The Government has also through the Sierra Leone Water Company (SALWACO) continues to provide technical as well as financial support alongside its development partners for the development of rural water supply schemes and SALWACO is being evidently strengthened to efficiently perform its current responsibilities.

However, the late Sierra Leone Ambassador to the United Arab Emirates (UAE), Architect Siray Alpha Timbo (in photo) of blessed memory through his shrewd diplomacy cause a cooperation agreement between the Emirates Red Crescent Authority in the UAE and the Ministry of Water Resources in Sierra Leone concerning the digging of artesian wells and ground wells in the rural areas of Sierra Leone.

The UAE Red Crescent Authority is a voluntary humanitarian body that plays a supporting role for official authorities in times of peace and war.
It was founded on January 31, 1983 and received international recognition for joining the International Federation of Red Cross and Red Crescent Societies in 1986.

Although Ambassador Timbo has died, the Chargé d’ Affaires in the Sierra Leone Mission in the UAE, Mr. Alieu Badar Mansaray and Sierra Leone’s Consul General in Dubai, Mr. Bahige Annan are working closely with development partners, including the Emirates Red Crescent Authority to see the successful implementation of all the projects the late Sierra Leone’s top diplomat in the Emirates initiated.

In an interview with the Director General of SALWACO, Mr. Samuel Bangura, negotiations for the agreement started in 2011 and that the Government of Sierra Leone signed the financial agreement sometime last year. He disclosed that April to July 2017 would have been the implementation period but the sudden death of Ambassador Siray Timbo caused the project to be put on hold. The Director General of SALWACO further disclosed that the project implementation started in December last year but there were some administrative delays, noting that they only concluded the process of arranging the funding in December 2017.

Mr. Bangura reiterated that the Government of Sierra Leone signed the agreement in 2016 with the hope of accessing the funding as early as possible for SALWACO to start the project implementation but it could not, adding that funding has been concluded and the launch of the project took place in some Northern rural towns of Sierra Leone on 20th – 21st January, 2018.

With the Ministry of Water Resources in Sierra Leone going into an agreement with non-traditional donors in the private sector in the UAE, it could be seen as a tremendous effort by the Government of Sierra Leone to tap new sources of funding to propel the country to development in every sector. Thanks to the efforts of Ambassador Siray Timbo of blessed memory for breaking a new ground to ensure that Sierra Leone improves access to reliable water supply services for the rural population.

The project description of the cooperation agreement between Emirates Red Crescent Authority and the Ministry of Water Resources concerning the digging of artesian wells and ground wells in the rural areas is as follows:-

First: Both parties agreed that the Second Party shall implement a project serving water resources in order to secure and provide drinking water in the rural areas in the Republic of Sierra Leone in accordance with the specifications, bills of quantities and prices set out in the appendix of the Agreement. The project is divided into two parts in accordance with the following values and details:

PURPOSE OF THE AGREEMENT

The purpose of this agreement is to provide a financial donation (grant) by the First Party to dig artesian and ground wells, manage the project and raise awareness among the community in the Republic of Sierra Leone in order to contribute to improving the water services provided by the Second Party as well as secure and provide drinking water in the rural areas agreed upon by both parties with a total value not exceeding US$ 2,734,173 (Two Million Seven Hundred and Thirty-four Thousand, One Hundred and Seventy-three United States Dollars) or what is equivalent in UAE Dirham including all the works of digging, extension, pipes, pumps and all other necessary supplies in addition to administrative fees, the enlistments of contractors and fees of consultation, if any, as this amount represents to maximum amount to implement the whole project.

According to the SALWACO Director General, “We hope to implement the project between now and July should the funding be consistent.” He disclosed that 25% of the amount has been released and that the project would be launched in rural villages far away from the capital Freetown.
The Director General explained the new technology of using boreholes with pumps, tanks and solar energy system which he said was introduced by SALWACO. He further explained the efficiency and effectiveness of the system for small rural settlements. Mr. Samuel Bangura disclosed that about 111,000 people will benefit from the project when implemented.

Over the years under the Ernest Bai Koroma-led APC Government, SALWACO has undergone serious transformation that has enabled the institution to efficiently perform its current responsibilities and rural water supply services. It has implemented several water projects in the rural areas funded by the Government of Sierra Leone and its development partners worth hundreds of millions of United State Dollars.

“Under Samuel Bangura as Director General, he has rapidly transformed the company from a dead to a more proactive institution by providing safe water for people in rural areas largely due to the young, intelligence and dedicated staff who are determined to implement the President’s dream of providing safe pipe-borne water to rural areas,” Sierra Express Media, an online Sierra Leone newspaper recently wrote.

On the telephone line from the Emirati financial capital, Dubai, Sierra Leone’s Consul General, Bahige Annan says the support given by the UAE Red Crescent Authority is very timely and will help provide clean drinking water to thousands of people living in areas with scarce sources of clean water and the project will also help prevent deaths caused by diseases related to unsafe drinking water.

He commended the UAE Government for always providing aid for all. The pivotal role always played by the UAE in the humanitarian field, Mr. Annan added, only reflects the key noble values of the UAE people under the leadership of their leader, His Highness Sheikh Khalifa bin Zayed Al Nahyan. “The UAE is the capital of giving, and that the people of the UAE are always keen on extending a helping hand to the needy,” Mr. Annan concluded.

Given the Government of Sierra Leone’s rural water supply-specific policy objectives with the broad objective to improve health and alleviate poverty of the rural population through improved access to adequate safe drinking water, it is hoped that SALWACO will live up to the task of successfully and efficiently carrying out its obligations in the project implementation before the end of the second quarter of this year.