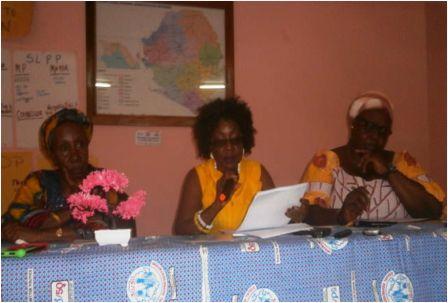 Speaking to Journalists during a press conference held at the 50/50 Group’s Building on 50 OAU Drive, Tower Hill in Freetown, the Founder, Dr. Nemata Majeks Walker stated that the group has run non-partisan campaigns for more women as leaders in governance, politics and public life.

She pointed out that the training of women and young adults nationwide (aspirants, candidates, and others) in leadership skills has long been the focus of the 50/50 Group adding that they have succeeded in getting more women interested in the electoral process and in governance.

“It was considered imperative to have a permanent base and training institute to expand the training capabilities for women in Sierra Leone”, she stated and mentioned that with an initial grant of $125, 000 from the African Women’s Development Fund (AWDF) in Ghana.

She discussed that the Government of Sierra Leone donated the land and in 2010, she said, the construction of the edifice commenced and dilated that the opening ceremony will be on the first floor and basement hall that serves as the headquarters and training rooms. When the other two floors are completed, Madam Walker said the building will include a 30 beds hostel for trainees and coordinators from districts, a 24 hour radio station and more seminar rooms.

In her statement, the past President, 50/50 Group, Haja Mariama Fofanah said majority of our women cannot read or write adding that they are working with market women through the Market Women Association Sierra Leone and spoke about a meeting held recently to address issues of Sexual Gender Base Violence (SGBV). “We have to look at how commercial sex workers are exploited”, said Madam Fofanah and emphasized that they want to work with every segment in society.

The current President 50/50 Group, Dr. Fatou Taqi explained that the organization is non-partisan and non-elitist and advanced that their responsibility as citizens is to stretch hand to help vulnerable class of people and mentioned that their mandate is advocacy and training.

If a woman is educated or empowered, the country will develop rapidly and stated that as a women group, they believed in collaborative work.