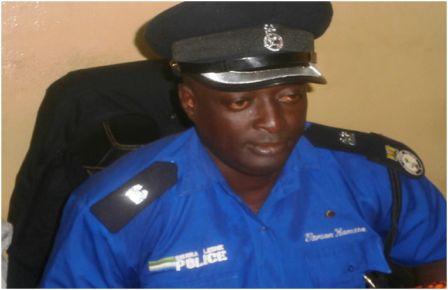 He said the bad boys were using Bloody Mary masquerade as an advantage to cause mayhem against peaceful citizens but nevertheless they were able to put situation under control.

“My area of command is prone to criminal activities especially Abacha Street where people rushed to buy and sell on festive seasons”, he stated and discussed that fourteen pick pocketters have also been apprehended and are currently under detention.

He said the Executive Management Board (EMB) singled him out as one of the best Police as a result of his commitment and he was awarded in 2013 by All Works of Life (AWOL).

The Opps expressed determination to get rid of all criminals and discussed that people are now doing their businesses freely with confident without any attack from thieves.

He disclosed that the newly appointed Inspector General (IG) of Police, Dr. Richard Moigbeh recognized his hard work and maintained that they have put strategies in place to counter any opponent.

Mr. Kamara encouraged civilians to report any Police officer to the CDIID who may attempt to connive with criminals to destabilize innocent people and emphasized that the use of pepper spray is more effective to conserve riot than tear gas because it prevents rioters from running so that they can easily be arrested.

He concluded by appealing to the public that Police cannot succeed alone without their cooperation because they know the bad men in their various communities.