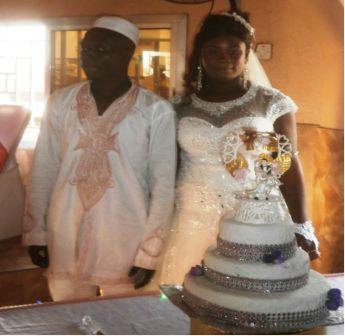 The Editor of the Sierra Express Media (SEM), Mr. Ibrahim Alusine Kamara, on Sunday 10th December, 2017, accomplished his mission to wed Isha Bangura traditionally in the presence of both parents and religious leaders.

The marriage reception was graced by several high dignitaries from various institutions including media houses at the Trivolli Hall on John Street in Freetown.

Speaking to friends and family at the jam-packed hall, Mr. Kamara thanked the Bangura family for accepting him to marry their daughter even though he had to undergo series of challenges to maintain the relationship. He congratulated his wife for her patience, understanding and support.

He stated that marriage is a blessing to both families because the Kamara and Bangura families have now been brought closer into one family.

He thanked family members, friends, colleagues, relatives, and the Chief Planner of the wedding, Mrs. Umu Koroma who he said played a very vital role to make the marriage a success.

Photographs from the wedding below Mr. and Mrs. Kamara standing before the cake