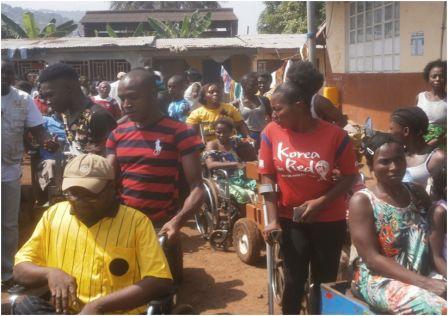 The Newly appointed Minister of Social Welfare Gender and Children Affairs (SWGCA), Madam Isata Kabia has on the 9th December 2017 given hope to various disable groups across the country in a bid to facilitate the cordiality between the ministry and the less privileged People.

The Minister made the move together with senior officials of the ministry through the Response team which include the newly appointed Deputy Minister of SWGCA, Tamba Opel Sam Sumana who happen to be the brother of the former Vice President of the Republic of Sierra Leone, Chief Alhaji Sam Sumana.

Speaking to various groups of disable people at OAU Drive via cotton tree off State House, Hon. Isata Kabia updated that the move is in line with the annual support that is usually given to the ministry to distribute meat to the destitute through the Saudi Government Project for the Utilization of Hajj Meats to the underprivileged especially the disable.

She said the ministry had deployed response teams across the country to facilitate the process of distributing the meat which she said is to give hope to disable people from different deprived communities as a package for the festive season adding that the Saudi Project for the Utilization of Hajj Meat is being managed by the Islamic Development Bank (IDB) together with the Ministry of Fisheries and Marine Resources.

In her good will statement to the disable home, minister Kabia told them that she was there with her team to know the current situation on grounds and emphasized on the ministry’s commitment to eradicate all forms of discrimination and extortion by some unpatriotic citizens.

She further discussed on her ministry’s commitment in addressing issues of disable people across the country and mentioned that they are working harder to assist disable people with skills training to become self-reliance.

The Deputy Minister of SWGCA, Tamba Opel Sam Sumana said the move is just to monitor all disable homes across the country in conjunction with the holiday gift which is been provided by the Ministry to give hope and activate the cordial relationship between the ministry and the disable associations.

He said the ministry will continue to responsible for the welfare of disable people in the country adding that the Government will put more effort to reduce their constraints.

The Secretary General, Alie M. Koroma of the United Polio Brothers and Sisters Association (UNPBSA) on behalf of executive members expressed thanks and appreciation to the minister and her team for what he described as a timely visit to the home.

He appealed to the minister on behalf of her ministry, for Government intervention in-order to empower more disable people with skills training like Carpentry, Tailoring, Welding among others through their association which is known as the United Polio Brothers and Sisters Association (UPBSA) on 40 lower parsonage Street kissy adding that the association has existed over eight years with tangible evidence.

When The President Bids Farewell T...