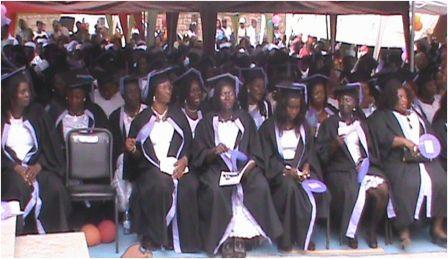 Sixty-four Class of Student Midwives Set 6 have graduated after successfully completing midwifery courses on the theme: “Midwives: Making a Different Through Partnership” on Saturday November 25, 2017 at the School of Midwifery Masuba in Makeni northern Sierra Leone.  (Photo: Cross section of graduands)

He reiterated that the fulfillment of the mandate calls for among other things the forging of partnerships between the Ministry and its partners, adding that it was only through the networking that they will be able to move ahead and faster. He commended the contribution of various partners over the years towards the success of the school namely the Medical Research Centre, UNFPA, WHO, ICAP, GIZ, JSI and other partners as their partnership is most appropriate.

Dr. Fofanah congratulated the organizers of the event for their creativity in coming up with such a very timely and relevant theme, stating that without partnership especially in the community like this, it will be difficult to make in-roads.

He informed his audience that Sierra Leone is still grabbling with high child and maternal mortality rate, and midwives are critical and pivotal component of the fight, adding that the Ministry will continue to invest in the training, absorbsion and retention of midwives.

The Minister disclosed that in addition to the two Midwifery Schools in Freetown and Makeni, they have recently commissioned one in Bo and plans are at advance stage for the fourth School of Midwifery to be commissioned in Kenema.

He told the gathering that they have instituted the Midwife Technical Training to address knowledge gap and accelerate the career progression of midwives, adding that they have recently reviewed the Scheme of Service for midwives alongside that of other health professionals so that they would now have more clear and defined career pathway.

UNFPA Representative, Dr. Kim Dickson said since the establishment of the School of Midwifery in Makeni, they have been supporting in education, regulation and association of midwives as they are very important aspect to UNFPA.

She said on education, they have been supporting the school by providing tuition, fees, allowances and uniforms and now made a pledge by increasing their allowances.

Dr. Dickson stated that whenever UNFPA put investment in to midwifery education, they at the UN Agencies often evaluate and acknowledged DFID for funding UNFPA to support the midwives.

The UNFPA Representative commended the graduands for their success and assured of UNFPA’s continues support to the school.

Giving the School Report, the Head of School, School of Midwifery, Makeni, Mrs. Francess Fornah said the graduation ceremony of 64 midwives making a total sum of 397 midwives since its establishment by the Ministry of Health and Sanitation in 2010.

She said the importance of building effective partnerships with a wider agency working relationship and midwifery cannot be over emphasized taking into consideration the appailing maternal and newborn deaths.

Mrs. Fornah disclosed that to date, the only appropriate skilled birth attendant is the midwife, adding that a well-educated, well-regulated and well-supported midwife will yield better health outcomes of women and their newborns. She added that over the years, the school has grown in status and stature and please to inform all that the school is doing well irrespective of the challenges.

WHO Technical Officer, Mrs. Patricia Titulaer said the graduation ceremony highlights and promotes the importance of well-educated midwives as a strategy to reduce maternal and neonatal mortality, and to enhance the health outcomes of all mothers and their babies.

She said WHO promotes midwives as the most appropriate caregiver to pregnant women and their babies, adding that they are supporting the Health Ministry to enhance midwifery education, regulation and service delivery.

She said the aim is to provide quality Nursing and Midwifery Services to the people of the country, adding that these documents will be a new training direction to improve on standards and Midwife Technician for the thousands of State Enrolled Community Health Nurses (SECHNs) in the waiting hallway to have additional skills to enable them perform dual roles in the nursing field.

The Chairman for the ceremony, Mr. Alhassan Fouard Kanu described the graduation as a milestone in the history of the Health Ministry in reducing maternal mortality in the country and acknowledged graduands for their real achievement.

Commissioning of graduates, distribution of awards and certificates, and commissioning of the Multipurpose Hall by the Health Minister climaxed the ceremony.