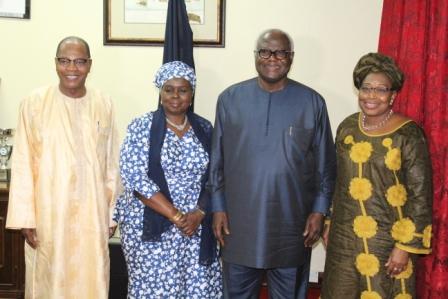 Dr Mohamed Ibn Chambas, Special Representative of the Secretary General of the United Nations on Tuesday 21st November led a joint mission composed of UN/AU and ECOWAS to Freetown, where they met with President Dr Ernest Bai Koroma. Mrs. Minata Cessouma Samate, Commissioner for Political Affairs of the African Union Commission and Mrs. Halima Ahmed, Commissioner for Political Affairs, Peace and Security of the Economic Community of West African States (ECOWAS) were part of the delegation.

The joint mission, which was in the country to continue discussions on the context of the March 7, 2018 elections, commended President Koroma for the consolidation of peace, security and stability in Sierra Leone throughout his tenure of office.

Dr Ibn Chambas disclosed plans by the UN/AU and ECOWAS to deploy long and short term election observers in the country. He proposed follow up measures with suggestions that the Sierra Leone Police engage political parties, provide security to all presidential candidates and also engage the women’s and youth wings of political parties. He congratulated the president for putting together a smooth process.

Dr Ibn Chambas also implored President Koroma to dialogue with the two leading presidential candidates in the Liberian elections to put their country first in order to reach a peaceful conclusion of the second round of the presidential election.

President Koroma reiterated government’s commitment towards the March 7, 2018 elections, saying that government has come a long way with preparations in terms of support to the National Electoral Commission (NEC) and the Political Parties Registration Commission (PPRC) as part of arrangements to hold elections as scheduled. He said new political parties had been issued registration certificates to participate in the process, while other political parties are conducting their national conventions. He also expressed hope that the PPRC will continue to effectively regulate the activities of political parties.

The president disclosed that NEC will soon begin to issue out voter identity cards to eligible voters, and also highlighted the irregularities surrounding the validation of the voter register, which according to him, NEC must address to ensure that nobody is disenfranchised.

He noted that government had provided security for presidential candidates in previous elections and assured the delegation of his commitment to ensure everybody is protected. President Koroma recalled that he was denied access to certain parts of the country when he was campaigning during the 2002 elections, but vowed that that will not happen in the March 7 elections under his leadership.

While promising continuous engagements with leaders of opposition parties to allow a smooth political process, the president warned opposition politicians and candidates to refrain from making inflammatory statements relating to the outcome of the forthcoming elections. He went on to state that Sierra Leone, under his leadership, has experienced the most peaceful era since independence.

Is Zimbabwe’s Constitution, all Sa...