Homepages
Your trusted place for Sierra Leone and global news
Trending News
HomeFeaturedIs Zimbabwe’s Constitution, all Sail and no Anchor?

Is Zimbabwe’s Constitution, all Sail and no Anchor? 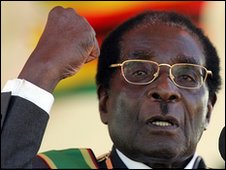 Is Zimbabwe’s Constitution, all Sail and no Anchor?

When the world heard that the army in Zimbabwe had held the relic and monument of Zimbabwean politics Robert Mugabe, there was a noticeable and palpable sigh of relief. This was not only a sign of the end of an era but was seen as the beginning of another. The role of Mugabe in the Independence of Zimbabwe is well documented. The history of Zimbabwe will not be complete without Robert Mugabe. The country and the people will be eternally grateful for all what he did for the country. In fact, they have more than over compensated and over ingratiated Mugabe for his efforts in leading their country to independence, by their sheer patience and tolerance of his demagoguery, FOR 37 YEARS. Even people who are given life sentences sometimes have the privilege of a parole. He never gave that to his beloved country.

Looking at the situation in Zimbabwe, it is fast becoming a political circus. But before we get into the jocular side of things, it is worth complimenting the Zimbabwe Army for their tolerance; to a point. But equally, I am beginning to be hopeful that Africa as a continent is fast turning the corner, in respect of governance, and the political gospel and sermon of constitutionality. It is refreshing that the military and the constitution are mentioned in the same breath and the same sentence. In days gone by in Africa, the constitution and the military were not only strange bed fellows, but was also a contradiction in terms. That is a big up for the military and the hope is that similar groups in Uganda, Angola and other countries with â€œuntil I dieâ€ leaders will learn from the Zimbabweans. I am not promoting unconstitutional removal of constitutionally elected African leaders. I am talking about African leaders who have abused, misused, and refused their respective constitutions to make sure they remain in power for donkey years; in order to legitimise their illegitimate tenure in office. How can one use unconstitutional means to constitutionalise their hold on power can beats any political logic? I would like to think that removing such leaders from power, by any means possible (except by BLOODSHED) is unconstitutionally constitutional.

This is where Zimbabwe as a nation, is facing the Dilemma of Mugabe’s Ghost, even while he is still alive. The question that is bothering many political watchers is why has he been given so much latitude; to a point that it is beginning to look like a referendum on who is to be the school prefect? It goes without saying that 20 years ago, there would have been a new kid on the block by now, and tenancy agreements to the government or presidential lodges would have been signed by new tenants. I do not promote such means, but do names like Valentine Strasser, Yahya Jammeh, Sani Abacha, JJ Rawlings, Maada Bio, Fatah Al Sisi, Samuel K. Doe, and Donald Trump ring a bell? Yes, the latter was a coup. So what is a coup?

Many experts agree that a coup d’état is an overthrow and the illegal and overt seizure of a state by the military or other elites within the state apparatus. The phrase coup d’état is French, literally meaning a “stroke of state” or “blow against the state”. In French the word “d’état” denotes a sovereign political entity. Although the concept of a coup d’état has featured in politics since antiquity, the phrase is of relatively recent coinage. The Oxford English Dictionary identifies it as a French expression meaning a “stroke of state”. The phrase did not appear within an English text before the 19th century except when used in translation of a French source, there being no simple phrase in English to convey the contextualized idea of a “knockout blow to the existing administration within a state”. Too much lexicography and semantics lesson.

So why is the military refusing to call it a coup, when by all standards their action fits the bill on the menu? One of the overriding reasons is the fact that such words are fast becoming obsolete on the African political scene and as a political jargon. With the SADC, other regional players and the world as observers on the one hand, and the long suffering people of Zimbabwe on the other, has that boxed the military into a political cul de sac? Why has the military not forced Mugabe to step down?

Is there a feeling lurking in the dark entrails of the Zimbabwean conscience; that the guy is too old for such treatment? Does the military feel that the country is too indebted to Mugabe, to deserve such an undignified exit? If that is the case, is the military worried about coming across as ungrateful, lacking respect for, and discriminatory to the elderly? But as if that is not enough, many are pondering about what drives a man to hold on to power for so long. We know that Mugabe is a major artery in the political blood circulation of the country. At his age, retirement should not have been an option but a necessity. Sadly, Mugabe appears to display a burning, life defying and self-loathing desire to cling on to power; even by the thinnest of threads.

The fact that Mugabe is still recalcitrant about going into pasture could conjure up a lot of theories. Is there a possibility that Mugabe may be having the backing of a silent group of loyalists, who may be whispering in his ear? Because of his stubbornness, some have described him as delusional. This might sound dismissive, but is there a possibility that at his age, he might be dementing, and as such be delusional. Should the army conduct a capacity assessment on Mugabe, taking into consideration his age and all the past traumatic events he has been through? Is there a genuine mental health issue here? By all standards, this man should be begging to retire. But it is the reverse and that in itself is abnormal. We have noticed how wobbly his gait has become, how he struggles to stay awake during public functions and how his speech has become slow recently. If these are not pointers for concern, I wonder what is. Or is it the Gucci lady egging him on? I hope that Mugabe will recall the story of Samson and Delilah. Or better still, the events that surrounded boxer in George Orwell’s Animal farm.

So where does the military and Zimbabwe go from here? As the army continues to drag its feet, and Mugabe continues to dig his heels, and with the ZANU-PF party sandwiched between the two, but looking like the only one taking decisive action by expelling Mugabe from the party, there is a significant risk of creating a power vacuum and a scramble for power. It is one thing to expel or remove Mugabe as head of the ruling ZANU-PF party, but it is also a different kettle of fish to terminate the ZANU-PF as the party in government. If Mugabe stands down, does that mean that ZANU-PF forfeits power? The Vice president has been ceremoniously named as the man to take over from Mugabe. Many have concluded that the “not so coup” was triggered by and in response to the culling of the VP.  Is that what the Zimbabwean populace is expecting after all this euphoria? Does replacing Mugabe with the Vice president make any difference? After all, was he not, until 2 weeks ago, sharing the same platform with Mugabe? Was he not part of the same cabal that started from the trenches right through to the transformation of the country from Africa’s bread basket to a begging bowl? Will this mean just a change of driver, same vehicle? Is this what the ordinary Zimbabwean was euphoric for?

Amidst the doubts and uncertainties, there is a risk that the any political vacuum created will trigger the need for it to be filled. If the army keeps sending mixed messages, if it keeps showing indecisiveness, if it keeps caressing and cuddling Mugabe; and by so doing locks itself into a political cul de sac, I hope it does not give rise to another band of military hot heads to seize the reins in a rather unsavoury manner. My basic feeling about military intervention is that it should be a last resort, undertaken only to stave off large-scale bloodshed. Intervention only works when the people concerned seem to be keen for peace. But again, maybe, just maybe, Zimbabweans would need to trust the wait and embrace the uncertainty.