The Fight Against Bribery And Corruption Deepens In Kailahun District 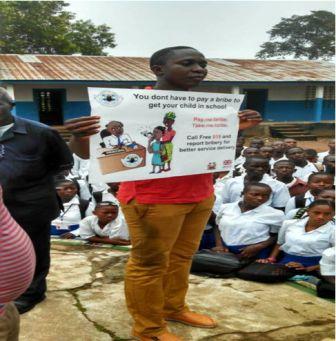 The Fight Against Bribery And Corruption Deepens In Kailahun District

The Public Education Team of the Anti-Corruption Commission (ACC) Eastern Region, comprising Sylvanus Blake, Sam Gogra and James Babin from the 6th to 10th November 2017 sensitized inhabitants of Kailahun District with a myriad of engagements and on the spot checks to key institutions, aimed at making the presence of the Commission felt in the District, doing some fact finding and risk assessment on corruption gray areas, sensitizing stakeholders on corruption related issues and empowering them to resist, reject and report corruption through the Pay No Bribe mechanism and other reporting platforms. (Photo: Mohamed S. Blake displaying PNB posters on education)

The well structured engagements started on the 6th of November 2017, at Buedu in the Kissi Tongi Chiefdom with visits to the Sierra Leone Police station, the Buedu Community Health Post and a very strategic border crossing point between Sierra Leone and Liberia known as NDAWA. During these visits, the usual ACC, Pay no Bribe (PNB) messages and IEC (Information, Education and Communication) materials were distributed in addition to an assessment of their operational practices and procedures. A well attended customized sensitization meeting was held with all relevant stakeholders at the court Barry which attracted traditional authorities, bike riders and drivers union, health workers, women, traders, youths, heads of schools and teachers, and the security sector such as; the SLP, RSLAF and ONS.

Across the various dates, the team visited Koindu and held similar engagements. On the spot visits were made to the two key border crossing points between Sierra Leone and Guinea at Pengu-Bengu. At the time of visit, observations and discussions with stakeholders, indicated that there was no Emergency Travelling Certificate (ETC) and other immigration documents that could rise and help manage much needed government revenue. Worthy of note also is the fact that there are approximately 57 border crossing between Sierra Leone and Guinean and Liberia and but only seven immigration staff and about four custom officers who are not mobile, no office space for them even at the borders where they are present and are assisted by volunteers who are not on pay. These pose a risk to the revenue potential of that region.

Meet the schools campaigns with the ever increasing desire to catch the kids young and imbibe the concept of integrity in them through awareness raising, sensitization and IEC promotion on the PNB and general corruption issues were also conducted in Buedu, Koindu and Kailahun, targeting the pupils, community teachers associations (CTAs), teaching and administrative staff of the major secondary schools to admonish them on corruption issues affecting the schools like extortions, illegal and unregulated charges, examination malpractices etc., and the position of government/Ministry of Education policies and the ACC on these issues.

In Kailahun Town, engagements were held with over 90% of MDA representatives who were reminded of their responsibility on the implementation of the National Anti Corruption Strategy, the expected role of the Integrity Management Committees of the various MDAs and other corruption issues. This was followed with a well attended meeting at the Kailahun District Council Hall which attracted all relevant stakeholders and the general anti corruption messages that will empower them resist, reject and report corruption were disseminated to them.

Radio sensitization program was held at the SLBC 95.1 in Kailahun to give an update on the operations of the ACC, explain some of the key practices that can be considered as corruption and encouraged the public on how and why to report corruption to the ACC. Part of the event also saw the team distribute Asset Declaration Forms to public officers in Kailahun.

During a courtesy visit to the Paramount chief of Kissi Tongi Chiefdom, Chief Nyuma Sengu Sahr-Kallan V, stated that the visit of the ACC could not have come at any better time than now when his people had many challenges and do not seem to know where, how and to whom to make their complaints for adequate remedy. He stated that if the fight against corruption is not supported by all to a wining end, the future of this nation will remain bleak. He and many other stakeholders including chiefs, ONS, the public and MDA heads requested for the ACC to continue such visits and make its presence much more prominent in the district