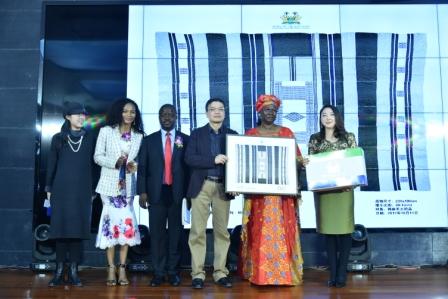 Mrs. Kumba Alice Momoh, Sierra Leone’s Chargé d’Affaires to the People’s Republic of China on 10th November, 2017, congratulated BEINGMATE Baby & Child Food Co., Ltd. (“BEINGMATE”) for their hardwork and commitment over the years, leading to the company’s 25th anniversary more so in what she called “a competitive global market.”

She also called on the company to explore Sierra Leone’s opportunities in investment and available markets “especially as the two nations now enjoy a strategic comprehensive bilateral tie.”

BeingMate produces powder milk for zero age to 36 months. In October of this year, it donated to Sierra Leone, through the Office of the First Lady, 24,000 tins of milk powder for vulnerable groups, mothers, infants and children. The donation was facilitated by Sierra Leone’s Goodwill Ambassador, Mariatu Kargbo.

It was crucial, Madam Momoh said, that the company was focusing on children since they “are the future and hope of a nation.” She thanked the company for the October, 2017 donation of a two 40ft container of powder milk to Sierra Leone, a goodwill gesture that she said “was overwhelming.” Madam Sia Nyama Koroma and the country, she said, remain grateful to BeingMate’s humanitarian spirit and generosity. “We also remain thankful to Mariatu Kargbo and call on BeingMate to work with her because of her drive and commitments in making things happen,” she said.

Founder and Chief Scientist of BeingMate, Mr. Sam Xie thanked all those who have over the years supported the company. He spoke extensively on the industry’s trend in the next 25 years.

As a Chinese national brand, he said, Beingmate has always been catering for infants and children and engaging in the research, production and sales of infant food.

He said, they are one of the leading companies in China’s baby industry, also one of the biggest companies serving infants and children in China.

Mariatu Kargbo was awarded in view of her significant dedication to BeingMate-Sierra Leone International donation Project.

Receiving the award, she expressed delight to have been awarded. She called on the company to have business operations in Sierra Leone.

In the form of One Belt One Road, Mariatu Kargbo said, BeingMate’s brand can represent China in the world. “As a goodwill ambassador of love, I want to congratulate you,” she said, referring to the award as being “a great honor.”

Both countries, she said, have had excellent ties of cooperation and the donation of baby milk to vulnerable groups in Sierra Leone signaled the beginning of a long journey.

It has eight (8) milk source bases in a number of countries, including China, Ireland and New Zealand and is “committed to continuously developing, manufacturing and engaging in scientific and safe maternal, infant and baby products and services.”